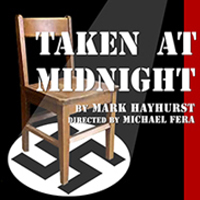 Taken at Midnight is a historical drama by British playwright Mark Hayhurst. The play uses a device of parallel, concurrent story-telling that covers a period of roughly six years prior to the commencement of WWII. Essentially, it centres on Jewish lawyer Hans Litten, from the time he was first taken into “protective custody” at Sonnenburg, until his eventual suicide in Dachau concentration camp. He was arrested around midnight of the Reichstag fire in retaliation to his controversial subpoena of Adoplf Hitler to appear as a witness in a criminal trial in 1931.

The play’s lateral story is perhaps even more extraordinary, as it focuses on Irmgard Litten and her heroic attempts to confront Gestapo hierarchy in order to rescue her son from the brutal treatment at the hands of SS (Schutzstaffel) guards.

The production places the political narrative in the capable hands of Suzanne Ristic as part of her role as Irmgard Litten, without which it might be difficult to follow her character’s interchanges with other players. Ristic conveys tenacity and moral authority without resorting to histrionics. What humour that there is in this play, is delivered subtly by Ms. Ristic.

Director Michael Fera, together with Kate Pierre’s authentic clothing provide an uncompromising verisimilitude to the politically stifling atmosphere of pre-war Berlin. Allyson Fournier’s triple-tableau set is, depending on where one is seated, not easy to see in its entirety. The stage is split between a roughly built wooden structure that serves as Hans Litten’s prison, Frau Litten’s living room and Gestapo official Dr. Conrad’s office. Sections are separated by imposing red swastika banners. As the action switches between scenes, Michael Methot’s lighting seamlessly adjusts with it.

Hayhurst’s play equivocally ends at the beginning with a verbatim account of the cross examination between Litten and Adolf Hitler. It’s an event that could have served as a caution to the world. In Frau Litten’s words spoken through Suzanne Ristic: “like all self-righteous men, they are the most sensitive to offense.”