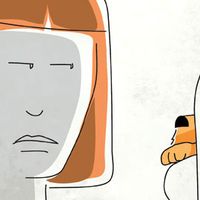 Sylvia by A. R. Gurney

Gateway chose this Broadway hit (1995) which originally starred Sarah Jessica Parker (Sex and the City) to be its season opener. That was indeed a good choice because opening night got the audience laughing, especially at Pippa Mackie who plays the lead role.

Even if you're not a dog lover, you'll enjoy this play because the character of Sylvia, an energetic lab-poodle mix, will literally speak to you, as the dog in this play is a played by a woman who communicates with the audience and the characters in plain English. It sounds hokey, but award-winning playwright Gurney has written a smart and unusual play.

Greg (Mike Stack), is the husband going through a mid-life crisis that affects both his professional as well as his personal life. Stack's performance is utterly believable. He's a man who is looking for absolute and unconditional love with no demands being made of him by the object of that love. What better to love than... a dog!

Lisa Bunting as Kate (Greg's wife and Sylvia's rival) wants her husband back because the dog has taken over the household, and eliminated her relationship with her husband. Bunting plays the lonely wife exceedingly well

Although Mackie steals the show, getting laughs and giggles practically every time she moves and speaks, I particlarly enjoyed the performance of Daniel Arnold who plays three roles in this funny play: a male fellow dog owner, a female friend of Kate and an asexual counselor. What versatility!

The direction by Johnna Wright was delivered with gusto, and the set design by Lauchlin Johnston was exquisite.

One word of caution. Although this is a delightful and funny romp, the show may not be suitable for the younger members of the family. Aside from its adult theme, the play is spiced with adult language.