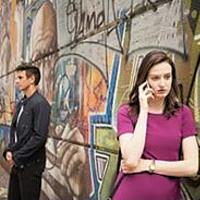 Nick Steeves is the producer and founder of Surreal Theatre - a fresh and inventive take on outdoor performance, inspired by New York’s interactive theatrical experience Sleep No More (a dialogue-free version of Macbeth, known as “promenade theatre”). Steeves takes it one step further, and wrote Surreal with his sister Darby (who is also one of two actors in the show). Needless to say, this is not your classical theatre experience. The characters share experiences with tinder, ideas on what it means to be a nerd, and how far should you go to impress a potential future employer.

About a dozen audience members awaited outside the awkwardly loud clanging bells of Holy Rosary Cathedral on Dunsmuir and Richards, where unbeknownst to us, a young woman was also waiting. At 8:01pm, the performance began promptly with Charlie (played by Darby Steeves) holding up her cell phone and declaring her annoyance at her boyfriend’s tardiness to their 4-year anniversary dinner, asking passers-by what they thought she should do. Enter old flame and childhood “across the street neighbour” Tom (played by the remarkably good-looking Luke Sykes), and both characters proceed to catch up while heading down the somewhat predictable path of flame-reignition - a path down which we the audience wittingly followed behind.

I did note an occasional awkwardness and reluctance from the audience to get involved - it did at times feel like we were intruding, it felt embarrassing following the characters down each back alley, stopping when they stopped, leaning in closely to hear what they were saying. The downtown streets around 8pm is full of sirens, loud motorcycles, the aforementioned clanging cathedral bells… so it was at times quite difficult to hear the actors. However, I think this was still somewhat effective in highlighting the general experience; the audience is effectually set up to feel uncomfortably guilty of voyeurism, which I’m guessing is part of the experience. We did not have the luxury of hiding in the darkness of theatre seating after all. Additionally, not hearing every word wasn’t much of an issue - for one thing, one could easily still get the gist of what was going on. And for another, the dialogue wasn’t the strongest thing about this production.

Ultimately, Steeves’ Surreal is an interesting (albeit slightly awkward) experience, one that I would recommend to anyone wanting a fresh alternative to the more classic bard on the beach performance. At roughly an hour running time, it was an ideal length for such an experimental endeavour, as I felt the plot was a little underdeveloped and longer than 60 minutes would have verged on uncomfortable. However, Steeves’ unique theatrical undertaking leaves a lot of room to expand on bigger ideas - perhaps involving more characters, or different neighbourhoods and plotlines. Let this unique production be an open invitation to all artists to foray further into this type of outdoor performance art! After all - Vancouver neighbourhoods are more than willing to provide an eclectic atmosphere.