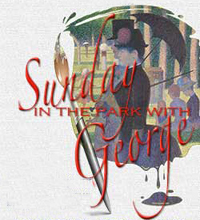 Plus an interview with cast member Brandyn Eddy

Nineteenth century Parisian painter Georges–Pierre Seurat could hardly have imagined that his own work, A Sunday Afternoon on the Island of La Grande Jatte would end up exhibited at the Art Institute of Chicago. Or that it would eventually become the inspiration for a Stephen Sondheim stage musical.

Sunday in the Park with George opened on Friday night (January 20) at the Jericho Arts Centre with Brandyn Eddy in the central role of Seurat and Martha Ansfield-Scrase as his long-suffering fiancé Dot (a character that might be based on Madeleine Knobloch, the artist’s model and muse who ultimately bore him a child).

Mr. Eddy and Ms. Ansfield-Scrase each display flexible timbre in interpreting Sondheim’s difficult songs, often overcoming the composer’s renowned lack of forte with sweeping melodies. An exception is the poignant duet “We Do Not Belong Together” that reveals the pair’s sentiment and sorrow.

There is little we know of Seurat’s personality, but Eddy is pretty convincing depicting him as a man with few joys beyond working diligently on his art. He also offers a nuanced performance as the latter-day George wrestling with artistic self-doubt. Ansfield-Scrase is delightfully coquettish as Dot in the first act and as her aging daughter Marie in the second act expressing warmth and whimsicality.

The production also boasts a director with experience in musical theatre and a top-drawer supporting cast. Among the supporting performances, I really liked Paige Dean and Ranae Miller as the two Celestes, who provide some spirited physical comedy.

There is an intriguing scene that ends the first act, when Georges marshals the subjects of his painting, positioning them into the tableau juxtaposed to the assembled triptych of the finished painting.

If the show has a single failing it’s the slow pacing, which is likely more of a problem with the writing than with direction. Sondheim’s songs that help drive the narrative are, in some cases, notably longer than regular show tunes and tend to cause the pace to lag.

Sunday in the Park with George is a gracious meditation on art and indeed life. This production seeks to emulate what Georges Seurat claims to achieve in his painting: order, composition, tension, balance and harmony.


On January 20th, Jericho Arts Centre re-open their doors for United Players’ first production of 2017: Stephen Sondheim’s musical Sunday in the Park with George. The musical was inspired by the painting "A Sunday Afternoon on the Island of La Grande Jatte" by Georges Seurat.

Vancouver actor Brandyn Eddy will play the title role, or more precisely, both title roles. I reached Brandyn by telephone at his home just a few hours after he had been out celebrating New Year’s Eve. “I play the real life French painter Georges Seurat in the first act, then his fictional great-grandson, who is also an artist named George in the second act” explained Brandyn.

There seems to be a mini revival of Sondheim’s stage musical and the local actor is aware of a new mounting in New York starring Jake Gyllenhaal as George with the opening set for February. “Looks like Jake Gyllenhaal and I will be competitors” quipped Brandyn.

He told me how much he was relishing kicking off a new year with a busy acting schedule. “Rehearsals for Sunday in the Park with George are already underway, and then come the pilot season auditions followed by a return to the Jericho Arts Centre in the spring for Peter Quiller’s End of the Rainbow about Judy Garland as her career declined.”

Brandyn was first bitten by the acting bug while performing in school productions at Thomas Haney Secondary School in Maple Ridge. He became more serious about acting as a career while studying in the Theatre Program at Capilano College (later to become Capilano University), appearing in student productions as the scarecrow in The Wiz and Aramis in The Three Musketeers.

When asked if there had been anyone that had influenced him, he had a ready answer. “I can’t say that I’ve been influenced by other actors, but I have been inspired by specific performances and use those techniques in my own work.” One performance that he found particularly inspirational was Carl Anderson’s iconic role as Judas in Jesus Christ Superstar. “It’s certainly a role that I would love to have the opportunity of playing at some point” he admitted.

Brandyn doesn’t much care to dwell on past accomplishments, but he is quite proud of playing against type with über nerd Seymour Krelbourn in Little Shop of Horrors and his part in producing Glory Days, a play in which he also performed.

In 2013, Brandyn Eddy left the comfort of his home town for a yearlong back-packing adventure in Australia. When he returned, he hit the ground running with a role in the Arts Club production of Spamalot. Unfortunately, due to an injury during rehearsal, he was unable to continue. He seems to know just how much temerity, conviction and belief in oneself is required to prevail in the theatre and is prepared to endure the setbacks as well as the successes.