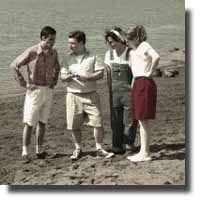 Metro Theatre
What I Did Last Summer by A.R. Gurney

This is a somewhat semi-autobiographical play of American playwright A.R. Gurney, a coming-of-age story set in 1945 in the Niagara Peninsula. Gurney is Charlie Higgins (Joe Hinks), a teenager spending time with family and friends at a beach house, learning about life and love during the last summer of WW2. He comes across Anna Trumbull (Robyn Bradley) who exposes Charlie to radical ideas about life.

Maybe it was this influence that got Gurney into playwriting, and thus, he looks back to this teenage summer episode and pays homage to this half-breed known as a "pig woman", discriminated by the community for being a loose woman.

This isn't one of the better plays of Gurney, and although the actors did try their best, if you have a mediocre play, no matter how good the actors are, the lines just don't click. For example, the four-letter words spewed by Charlie which caused a lot of oohs and aahs from the first matinee audience didn't seem to fit into this ambience. True, he is a rebel, but I grew up in the 1940s and teenagers weren't as bad as they are now where every other word uttered has the f word.

From the actors' point of view, I sat at the back of the theatre and the only actor whose diction was clear was Julia Siedlanowska who played Bonnie, the girl next door. The others either spoke too fast or weren't clear in their speech or weren't projecting enough. Projection is an important factor especially during matinee performances where the audience are mostly seniors and have hearing problems.

However, for an amateur production, I commend cast and crew for a production well presented. .