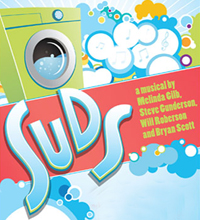 SUDS: The Rocking '60s Musical Soap Opera is part jukebox musical and part retro revue; it largely succeeds by taking the audience back to pre-Woodstock times with a hokey, light-hearted celebration of the best (and occasionally worst) sixties popular music.

SUDS takes place in a friendly, sixties style Laundromat and spins (ouch!) the story of Cindy (Javia Selina), and her guardian angels, Dee-Dee (Natalie Schreiber) and Marge (Stephanie Liatopoulos) that help her to get past a severe bout of the blues. Dee-Dee is a naïve, well-intentioned “angel-in-training” and Marge is street-wise with a take-charge spirit.

It happens to be Cindy’s birthday (we don’t get to know which one), but when the postman (Matt Briard in one of his multiple roles)calls, instead of delivering greetings, he delivers three items of bad news, all coincidentally involving a Chevrolet Corvair. I thought it curious that our heroine, on hearing of the death of her cat and the imposition of a $10,000 debt, was most affected by the news that her pen-pal had “signed-off” – but with a goofy revue like SUDS, we shouldn’t be too analytical.

The show serves up around four dozen songs in just under two hours, so there isn’t much of a narrative arc or meaningful dialogue. However, it’s all very well paced with chuckles as well as hits just keep on coming. Some of the songs fit in to the storyline perfectly, while others appear shoved in like a clumsy dealer shuffling a well-used pack of cards. The songs are well sung, and delivered with spirit and conviction. The Burt Bacharach medley half way through the first act that features the three girls in close harmony is terrific.

Javia Selina is winsome with a likable vulnerability in the role of Cindy. Stephanie Liatopoulos is hilarious as the cynical angel Marge who has a big personality and voice to match, while Natalie Schreiber is endearing as Dee-Dee. The pair delightfully play off each other’s diametrically opposed characters. Matt Briard makes the most of his comedic talents as Johnny Angel.

Jeremy Hoffman on Keyboards and synthesizer, plus Steve Taillefer on guitar, Ed Fabian on bass and Skip Parker on drums provide first rate support throughout.

SUDS is all about having fun with radio-friendly songs. The program lists them all in alphabetical order (personally, I would have preferred a chronological order). If, like me, you were around in the sixties you’ll feel like singing along.