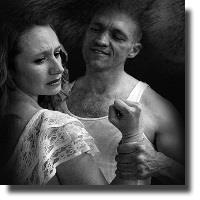 Tennessee Williams’ masterpiece, A Streetcar Named Desire, is an incredible challenge even for the most seasoned theatre veterans, so it’s fair to say I was impressed that a small and somewhat new theatre company would rise to the difficult task.

Open Door Theatre Company bought the rights to the full script of Williams’ play and set out to perform nearly three hours’ worth of a story fraught with emotional turmoil and restless desperation – an ambitious undertaking to say the least.

Walking into their theatre on 350 Powell Street, set in a small understated space in the downtown eastside, I made myself comfortable for the ensuing epic story in a small 25-seat room. The set design was cozy but successfully conveyed the squalid apartment scene of the narrative at hand. A few tables and chairs, a few touches of New Orleans 1960s vintage flair, and a collection of bottles of hard liquor set the stage nicely.

Most are already familiar with the story of culture clash between the fragile and seemingly refined outsider Blanche Dubois and her slow emotional downward spiral as a result of trying to find a new start when visiting her sister Stella and Stella’s husband Stanley. The actors have a big job to do and this cast worked very hard to make the show a success.

Leanne Kuzminski played the role of Blanche Dubois, showing a fretful and anxious but attractive Southern lady hiding a haunted past. This is not an easy role, but Kuzminski has the stamina to take us through Blanche’s vulnerable journey quite well. Though her trembling-voiced delivery is a bit overplayed at times, her fragility is palpable and Kuzminski is arguably one of the only performances of this production that successfully reveals her character’s depth.

Her sister Stella is played by the very feminine Andressa Ester, who plays Stella’s softness and gentleness fairly well. Stella’s interplay with Stanley (played by Scott Woods) is convincing; one can sense the awkward and young desperate love between them. But the relationship between husband and wife is somewhat two-dimensional here, and is conveyed mostly through Woods’ loudness and oafishness as Stanley and Ester’s easily yielding character. I would have liked to have seen more depth to these characters, more focus on motivation – for example, Stella’s attraction to Stanley’s violent, animal nature (one of the arguably more intriguing themes of the play) is not much highlighted.

Supporting cast included Bruce Hill as Mitch, Blanche’s short-lived suitor and friend to Stanley, with Julia Fox and Kevin Sloan who play Eunice and Steve Hubbell who live upstairs from the Kowalskis. Fox as Eunice gives a spirited performance as a stronger-willed and plucky wife, almost more dynamic and believable than Stella herself as a complex interesting character, definitely a highlight in this performance. Mitch is played by Hill as a bit of a simpleton, effectively being overshadowed by Blanche and Stanley’s collision course. I would have liked to have seen Mitch’s character as a small bit of humanity that could have contrasted well with the play’s central theme of destruction, but unfortunately the character is all but lost in the action – not making much of an impression at all.

In the end, I felt that Streetcar’s immense story was aptly narrated in this production, but some of the deeper, darker and more intriguing elements of the story were lost.

That being said, I appreciated Open Door Theatre’s ambitious intentions and was additionally pleased to hear that the proceeds from one of their performances are to be donated to the Battered Women’s Support Services. Being that this was Director Alexis Ioannidis’s first time directing, I’m interested to see what this theatre company has to offer next.