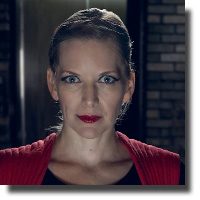 It's that time of year where vampires, demons and other spirits roam our world. And so, theatre also reflects this, and in particular, this play by Yockey who is into horror and the supernatural. In an email I received from him, this is what he says about his plays: "All of my work deals with the space where realistic human issues/drama rub up against a larger, unseen world. Horror (or suspense) lends itself best to this friction - and to borderline 'melodrama.' In this case, I was inspired by Japanese folk stories, Western horror tropes, and the idea of monsters both literally & figuratively".

When I asked him how his play did in LA, he said, "The play was presented in Los Angeles in 2012 and won the 2013 LA Weekly Playwriting Award. The production, directed by Michael Matthews, did very well and was well received. Playing in a small venue definitely helped it always feel full and usefully claustrophobic. The play is now published by Samuel French and has been produced many times around the US and in the UK. It's definitely an usual play that tends to have very good word of mouth with audiences and a strong response from critics."

This play produced by Shift Theatre made its Canadian premiere here in Vancouver last week. The play recounts the history of a cursed hotel and the unfortunate guests who stay there. From riding in an erratic elevator and dealing with possessive ghosts to managing an ever-expanding hole in the floor armed only with cleaning supplies, these encounters with the unknown chillingly collapse the distance between the real and the surreal.

The other actors projected quite well, and Nick Sartore's direction--stage composition, blocking, creative directing--was quite good. The mood through lights and a screen in the background projecting a white background with black lines reflecting the mood and dialogue was something that reminded me of "White Noise", a paranormal film starring Michael Keaton.

Run by Artistic Managing Director Nick Sartore and Artistic Producer Christina Andreola, SHIFT Theatre is a collective of emerging artists whose mission is to create honest, relatable, and interesting performances. It was founded in 2008 to provide emerging theatre artists with opportunities to stage unconventional, risk-taking productions of short theatre.