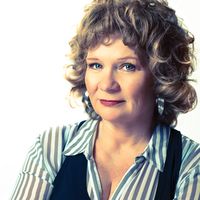 Beverley Elliott stars as Lucille in concert, Alison Macdonald as the young Lucille and Jeff Gladstone as Lucille’s husband, Bob Regan, in The Firehall Arts Centre's new season’s opening presentation. The year is 1981, in her hometown, Coquitlam British Columbia, a comeback tour for Lucille. In this concert-show, she brings the memories and music of her past-- those struggling days when she and Bob toured insignifican clubs in Canada, earning $15 a show. But everything paid off eventually as she had her glorious days when they hit LA and made names for themselves as the famed Canadian Sweethearts duo. Then, the break-up because Lucille got more popular than Bob with her platinum record "The French Song".

Tracey Power, an award-winning actor and writer, weaves a behind-the-scenes plot of Lucille Savoie (Lucille changed it to Starr later on because Americans had a hard time pronouncing her French name). As she narrates her life story in this concert in-between her country music renditions, she recounts the good and bad ol' days of her personal life and career. Flashbacks take us to scenes of how she got involved in music, her life in Maillardville, Coquitlam which was once a French Canadian neighbourhood, and how she fell in love with Bob who was the local dashing young bachelor guitar-playing musician whom she eventually married because she got pregnant with him.

Director Barbara Tomasic who currently is the Artistic Director of Musical TheatreWorks does an interesting mise- en- scene of the production. With the band already placed at upper centerstage, Lucille makes her dramatic entrance. She greets the audience (apparently nervous, as we hear a voiceover of Lucille expressing her nervousness as she reflects in the dark when the lights are dimmed at the start of the play). But when the lights come up and the audience applauds, she is all smiles and appears relaxed.

Bevery Elliott, of the Coulda Woulda show I reviewed three years ago, is indeed an accomplished concert entertainer. She gets the audience clapping as she sings her country music; she does have good rapport with the audience. After all,she is a concert entertainer. She dresses up like Lucille Starr, and we know this because at the end of the play, we see a TV archival footage of Lucille being honoured in the the Canadian Country Music Hall of Fame. When we google Lucille Starr, we see Youtube footage of the young Lucille, and Alison Macdonald whom I've seen in The World Goes 'Round (Another Musical Co-op) is the spitting image of the young Lucille.

Both Beverly Elliott and Alison Macdonald sang beautifully. I think they even sang better than the original Lucille! There's that adage where the student oftentimes supercedes his teacher. Jeff Gladstone who plays Bob Regan reminded me of film comedian Jim Carey in some of his scenes. He is portrayed as the villain in this musical, the cause of Lucille's downfall. I somewhat wished as I was watching the deterioration of Lucille and Bob's marriage that Tracey Power could have added a scene or two showing Bob Regan's side of the story. Perhaps he felt bad, and that's why he started drinking and acting obnoxious and abusive to Lucille. In this show, he was depicted as bad, bad, bad.

I wish we had more shows of this kind-- musicals about the lives of Canadians who made it big. Perhaps more musicals depicting the lives of Gordon Lightfoot and Bryan Adams?