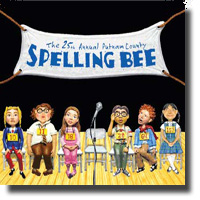 There is much more to The 25th Annual Putnam County Spelling Bee than meets the eye. Thats not just because of the instrumental accompaniment of Bruce Kellett and his crew, although the music is amazing. Nor is it all attributable to Yvan Morissettes superb recreation of a bright school gymnasium for the set. Nor is it simply a factor of the many consummate individual performances worked up to perfection under the inspired direction of Michael Shamata which bring William Finns music and lyrics to life with lustre and panache. The lively humour of The Spelling Bee is both original and intelligent, designed to create more buzz in the arts community than a stadium-full of vuvuzela horns does for the soccer community.

Neither the sacred cow of religion nor that of politics comes off unscathed by wits sharpened point in the BC version of this musical, and everything from home-schooling to the suburb we all love to scandalize are also roasted in fine form. When the humour is not being dished out in ironic choruses sung with gusto and given added punch through the cutting-edge choreography of Laura Krewski (watch especially for the fine-finesse detail of the slow-motion sequence), it keeps the audience in stitches by taking the form of weird and wonderful sentence examples for such arcane spelling words as strabismus, dystopia, or a wide array of other cleverly offbeat words.

Then there are the sight gags, ranging from a divine intervention of unexpected ethnicity to a surprise twist resulting from unexpected growing pains. No spelling bee is without its losers, but they are all beautiful in their own way. Each character is an eccentric, colourful blend of strength and frailty, and each is allowed to shine in his or her own exclusive solo performance. Josh Epstein as William Barfee, Tracy Neff as Olive Ostrovosky and Rosie Simon as Marcy Park were particularly outstanding in their respective roles, singing and dancing their way vigorously through the entire show with exemplary style.

It is a shame to highlight just these three, when the entire cast merits praise for their unique and energetic performances. Also, I would be remiss were I not to acknowledge Erin Macklem for her exquisite choices in costume design. Stunning!

If I could have a word with you about the cast and crew of The 25th Annual Putnam Spelling Bee, that word would spell S-U-C-C-E-S-S. This play is sure to be a success, because its quirky way of dealing with offbeat personalities and issues of academic competition makes it thoughtful and entertaining theatre.