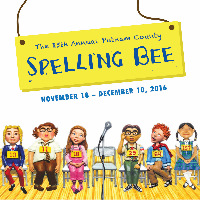 The 25th Annual Putnam County Spelling Bee is a Tony nominated musical being presented in the heart of the West End and is a light, upbeat performance that lifts the spirit from the dreary weather of this West Coast winter.

The single-set stage is the spelling bee competition where six ‘tweens’ battle it out to win the coveted prize of being the best speller. Each contestant is unique with their own life story, while embodying stereotypes common to young students. With two judges to guide the contestants through the competition filled with music, humour and dance, this fast-paced performance definitely didn’t drag.

With a few empty spots available in the competition, the judges brought in select members of the audience to join which truly made it interactive and engaging. Knowing that these audience members hadn’t received the liberty of rehearsal, their impromptu responses to the spelling challenge brought laughter as we knew it could have been any one of us.

Accompanied by a live band, the singing was on point and the strong talent of the cast was apparent. The solos were powerfully sung and while only six voices joined in during the chorus, it felt as though it was a full-fledged choir. Given the limited amount of real estate and the acoustics, this was a key factor to the success of the performance.

The script was smart and well-executed by this diverse cast. They instilled a sense of nostalgia throughout the performance, making us think of our own earlier years in school. While you might not identify yourself with one of the students, you certainly will be able to pinpoint someone from your own school that the cast embodied.
The costumes truly transformed these actors into their mid-pubescent roles, where I was questioning myself during the performance in terms of how old they truly are in real life.

Lastly, the choreography was well thought out as the cast mimicked the actions that one would expect for the different roles, whether it was the stern Vice Principal who has run out of patience with children or the child who refused to grow up.

I grade this an A+ performance.