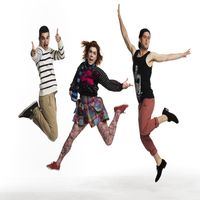 Award-winning American playwright Stephen Karam has come up with a play that has gotten accolades in different productions around the United States. It's a good play which was nominated for the 2012 Pulitzer Prize. When you have a good play and good actors, well, obviously it's going to be a success.

As I watched this play, I could see all the energy and gusto played out by Scott Button (Howie), Claire Hesselgrave (Diwata), Alex Rose (Solomon) and Jenn Suratos (Teacher/Reporter). Director Brian Cochrane, in his notes, mentions that this is an actor-oriented play, but even then, you still need a director to synthesize things. And Cochrane did a great job delivering the mise-en-scene.

This is a must-see play about three teenage misfits brought together by a sex scandal in Salem, Oregon. You'll enjoy the zany songs, and dance routines. The projections were well-designed by Craig Alfredson and Chengyan Boon, as blogs and email exchanges were projected on screen.

Kudos to this company of young thespians who are in their twenties, I presume, as that's what the company is called.