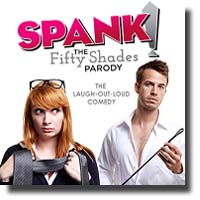 SPANK! The Fifty Shades Parody
plus an interview with Danielle Trzcinski

Spank! The Fifty Shades Parody takes a good-natured swipe at British author E. L. James’ Fifty Shades of Grey (which I have never read) with a show that is part sketch comedy and part Chippendales. The humour is certainly broad, but while there is a lot of risqué posturing, and sexual double entendre, there is little attempt towards gratuitous obscenity. From what I saw looking around the theatre, it was mostly a girl’s night out that gave soccer moms an opportunity to let their hair down.

The storyline (such as it is) follows E.B.Janet (Anne Marie Scheffler) home alone for a weekend while husband and kids are away. Sitting with a laptop and sipping liberal amounts of chardonnay, she becomes author and narrator developing the two primary characters on the fly. Tasha Woode (Danielle Trzcinski) is a naïve 22-year-old student and hardware store employee who falls under the spell of handsome billionaire Hugh Hansen (Christian Grey in the book) who has a thing for role-playing – especially when it involves B&D, S&M and D&S (if you don’t know what the initials stand for, you probably won’t want to).

The three actors supplement the action with parodies of popular songs like the Carpenters’ “Close to You,” and “16 going on 17” from The Sound of Music. Patrick Whalen, who somehow manages to put in an unflappable performance in the role of Hugh Hanson, gives a ludicrously comical interpretation of Gilbert & Sullivan (from Pirates of Penzance).

The show’s fast pace slows down significantly with Danielle Trzcinski’s forays into the audience. I’ve always thought that bantering directly with members of the audience is a weak device for filling in the show’s gaps.

I’m sure these actors will go on to do better shows than Spank! Trzcinski obviously has a future in physical comedy while Whalen shows that his versatility also extends to choreography.

I did get a few chuckles out of Spank! and it was fun seeing the (mostly female) audience having such a blast. So, what’s wrong with a bit of fantasy anyway?

An Interview with Danielle Trzcinski

Danielle, who hails from Tampa Bay, Florida, was quick to explain that the sadism/masochism depicted in the show is more camp than carnal. “Sure, leave the kids at home, but you could bring Grandma” she revealed. “Most people who have read the book are women ranging from early middle-age to senior. But we’ve also been getting terrific audience response from men who came along to see the show with wives and girlfriends.”

Aside from the role of Tasha, Danielle also contributes her writing talent. Vancouver audiences will hear her sing the self-penned “I don’t know what to do anymore” – the only original song in the show.

This will be Danielle’s first visit to Vancouver, but she is no stranger to being on tour. She previously travelled with Nickelodeon’s Storytime Live! where she took on the role of Dora the Explorer’s map. She seems to enjoy visiting new cities. “As part of my studies at the American Musical and Dramatic Academy, I spent six months living near Tottenham Court Road in central London (UK) on a Study Abroad Program” she recalled.

When asked which accomplishment she was most proud of, she told me about a show that she helped create and performed in at the New York City Fringe Festival. “I wrote the book and lyrics for Non-Equity: The Musical. It’s all about a struggling artist trying the get an Equity union card” she proclaimed proudly.

When this energetic artist is not working, she spends her free time writing lyrics for what might become future musical theatre. She is inspired as a writer by Tina Fey, the former head writer from Saturday Night Live. My final question for Danielle: “If you had the opportunity to play any role in film or musical theatre which one would you want to play?” Her response was instantaneous “I guess my dream role would be playing Elphaba, that’s the misunderstood green witch in the musical Wicked.”

Being a Florida girl, she’s hoping for sunshine while the show is playing Vancouver. I wished her “Good Luck.”