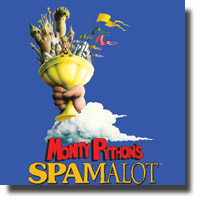 
“Sweet Sir Galahad” is one of my favourite among numerous Joan Baez folk songs. Part of the lyric of this winsome song goes “was I born too late, and do you think I’ll fail at every single thing I try.” Thank whatever force you feel flows through the green fuse that you were born in time to take in the Arts Club production of Spamalot. It is a hilarious send-up of medieval legend and lore done up right in a manner that is very true to the original Monty Python movie on which this musical is based.

There are plenty of laughs to be had, whether it be at the goofy gallantry of Sir Gahalad, the timorous temerity of Sir Robin, the feckless flatulence of Sir Bedevere or the indomitable ineptitude of that Excalibur-toting monarch himself, King Arthur—or all of the colourful and varied antagonists who get in the way of these round-table buffoons.

In case you haven’t yet cottoned on to the premise, this loose collection of Monty Python skits is based upon medieval legends of King Arthur and the Knights of the Round Table, who are on a quest for the Holy Grail. Plenty of slapstick humour, dry witticisms and ridiculous songs abound in this Broadway musical (staged in the Stanley, it’s actually just off Broadway!).

Wonderful themes of Spamalot include the closed rhyme idea that finding your grail might just mean getting hold of the right male. There is some delicious irony when one of the knights is outed in a dazzlingly gaudy display of delicious song and dance before he even realizes he’s gay. The fool’s errand of a rescue he finds himself sent out on is a fine bit of priceless comedy. Here and throughout the performance, Lisa Stevens’ choreography is perfection and precision personified.

The humour is at times stretched as thin as the blade Sir Arthur uses to sever all four limbs from the unfortunate Black Knight who nevertheless relentlessly attempts to attack his opponent even after he is clearly and decisively defeated; but, it only serves to saturate, suffuse and intoxicate the audience.

Terra C. MacLeod shines in her role as the Lady of the Lake in dazzling performances of such stand-out numbers as the laughably satiric “The Song That Goes Like This” and “Whatever Happened to My Part.”

Although Ms. MacLeod’s performance is certainly worth the price of admission, the fact that Spamalot more than does justice to Monty Python is due in no small part to director Dean Paul Gibson’s masterful touch with the actors of this wonderful piece of entertainment. There is as much of a fluidity and fulsome effortless feel of craftsmanship outperforming penmanship here as there was in Xanadu, that feel-good hit of summer-past. Summer is not yet upon us, but Spamalot is here early to heat up the season.

You probably won’t “fail at every single thing” you try, like Ms. Baez sang all those years ago, but a key theme for Spamalot is sung to a different key when Ms. MacLeod sings “Find Your Grail.” If you find yourself at the Stanley for an evening during the run of this production, it’s a sure thing you’ll find yourself laughing out loud and enjoying one of the best musicals the Arts Club has mounted since Xanadu. Whatever you do, don’t fail to see it.

Josh Epstein plays Sir Robin, Brother Maynard, the French Taunter, and a few others in the Arts Club production of Spamalot from May 8 to 29 at the Stanley Industrial Alliance Stage. Below is an email interview with him.

How did you get involved with Spamalot?

Dean Paul Gibson, the show's director, had a conversation with me about a year ago about the potential of doing Spamalot. Dean and I met almost 15 years ago when I worked on his professional directing debut (The Two Gentlemen of Verona) and he’s been a great mentor to me ever since. I got very interested in the role of Robin and the French Taunter, then started doing some research. I wanted to go on this journey with the Knights of the Roundtable; live the dream so to speak.

Could you give me a brief bio of your professional work?

I’ve been a professional actor since I was 9! At the Arts Club, I was in shows including Do You Want What I Have Got? A Craigslist Cantata, The Producers, Beauty and the Beast, Funny Girl, Marvin’s Room, and The 25th Annual Putnam County Spelling Bee for which I received a Jessie Award. Later this year, my film company with Kyle Rideout, Motion 58, will be releasing its first feature film Eadweard, with support from Telefilm and Superchannel. Our second film, Public-Schooled, will shoot later this year with support from the CFC, Telefilm, the NSI, and the WFF. I’ve also starred in shows across the country, and recently appeared in two seasons at The Stratford Festival in The Grapes of Wrath, Titus Andronicus, Cymbeline, The Matchmaker and won the John Hirsh Award for most promising actor.

What do you think is different about this production comparing it to other shows you've been in?

The fun! It is a non-stop laugh riot. Every time I tell someone I’m playing the French Taunter they start quoting him, so obviously I have big mustaches to fill. We’re also so busy in the show! Every time we’re not on stage we’re changing armour, wigs, mustaches, all while singing off stage.

What part do you play? Are you happy with your character in this show?

I play Sir Robin, Brother Maynard, the French Taunter, and a few others.  I love the parts I play, especially the French Taunter. I get to say and do many naughty, dirty things, and maybe even throw a stuffed cow at people…you will have to come see.

What future plans do you have in your acting career?

I’m going to be producing and writing my second film later this year and I’m developing some TV projects as well. I will be directing my first play in Ontario in May 2015, Stop The World I Want To Get Off.