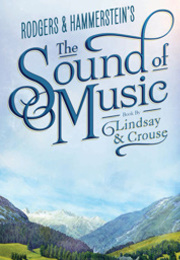 Now this is what musicals are all about. And I hope BAC can continue reviving these wonderful musicals by Rodgers and Hammerstein.

It was an electrifying opening night and the audience stood on their feet in ovation as the cast came out to take their bows. Special accolades go to Lauren Kidwell (The Mother Abbess) who got "Bravos" and wild applause after singing "Climb Ev'ry Mountain" at the end of the First Act.

Also a standing ovation and cheers for Jill-Christine Wiley (Maria ) and Mike Mclean (Captain Georg von Trapp). And naturally, the von Trapp children. Personally, I liked them the best. Oh my! They were so charming, especially Madeleine Guilbot (Gretl). What a talent!

The musicals of Rodgers and Hammerstein.will never be forgotten. The songs have been alive for more than half a century since this musical first was produced on Broadway in 1959 starring Mary Martin, and winning 5 Tony Awards. But its popularity grew when it came out as a film in 1965 with Julie Andrews and Canadian actor Christopher Plummer. 2015 marked the 50th anniversary of the film version, which continues to be the most successful movie musical in history.

The songs ( “My Favorite Things,” "Climb Ev'ry Mountain", “Edelweiss” and the title song) are eternal as they will never die in the memories of audiences who have seen the play, especially the movie which has been shown time and again on TV. It came out again on live television on NBC in December 2013 and was seen by over 44 million people.

The orchestra under the baton of Music Director Michael Uselman who also plays Keyboards accompanied the singers beautifully. The sets designed by Douglas W. Schmidt were magnificent especially the Abbey's stained glass window whose light effects designed by Natasha Katz were mesmerizing. The period costumes of the 1930s by Jane Greenwood were to the T.

The story is based on true events that happened to the Trapp family who escaped from the Nazis and made me their way to the USA via Switzerland and London.

I hope Broadway Across Canada revives more of these wonderful and truly Broadway classic musicals of Rodgers and Hammerstein. Perhaps South Pacific, in the near future?

Next week (September 12) the national tour production of The Sound of Music rolls into town for the Canadian leg of the tour with eight performances at the Queen Elizabeth Theatre. Audiences lucky enough to get their hands on tickets can expect to see one of best shows in terms of production quality to come to a Vancouver stage.

That is not to say that Vancouver audiences won’t also be thrilled with the performances. One performer who will surely attract special attention is Californian Mike McLean who plays Georg von Trapp. A role made famous in the film version by Canadian icon Christopher Plummer.

Mike talked to me by telephone from Seattle, Washington, where the show was running at the Paramount Theatre. I asked him how he liked being a part of the company of The Sound of Music. “It’s an absolute pleasure” he answered. “I’ve been part of a couple of touring shows previously with Guys and Dolls and Saturday Night Fever, but this is by far the best production I’ve been involved with.”

The 1965 film version which was set in 1938 Austria featured Julie Andrews in the role of Maria, and is itself an adaptation of the 1959 Broadway musical with the score by Richard Rodgers and Oscar Hammerstein II. I asked Mike how the stage version differs from film version. “Well, it’s shorter. Some of the songs have been taken out and more emphasis put on the story-telling.” “I’m sure people will leave the theatre thinking ‘I thought I knew the show’ because the narrative goes deeper.”

Mike has a genuine affection for the show’s time-honoured songs. “As a child, I remember my mother singing My Favourite Things, so you might say I grew up with the music.” Unlike Christopher Plummer whose guitar playing on Edelweiss was dubbed by a professional musician, Mike gets to accompany himself on guitar when singing the song.

Mike has only been working professionally for about eight years, but has enjoyed the privilege of performing as an amateur at both the Kennedy Center in Washington, DC and at Carnegie Hall in New York. He is proud to acknowledge that he has been inspired by his sister, actress-singer-writer-teacher Grace McLean. Who, In addition to regularly performing in Off-Broadway hits like Natasha and Sleep No More, can be found performing live with her band Grace McLean & Them Apples at Joe’s Pub at Rockwood Music Hall in New York City.

Unlike many artists, Mike claims to relish ‘life on the road.’ “I take some joy in experiencing the flavours and cultures of different cities. Each place we visit offers a distinctly different vibe that comes from the audience. Also, we get to perform in a variety of theatres. Some are modern with amazing sound and lighting systems, and some are old theatres that hold their own charm.”

Talking to Mike McLean, one is left with the impression that he’s a dedicated artist, though disinclined to take himself too seriously. When he is not rehearsing or performing on tour, he likes to spend time discovering the town he finds himself in, or just looks around for a gym so thathe can stay in shape.