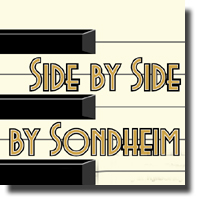 White Rock Players’ Club
Side By Side By Sondheim

Ryan Mooney directs and narrates this show, a Tony-Award-Winning musical illustrating the wide range of Stephen Sondheim's abilities and those of his collaborators. Mooney gives us a background of the different works of Sondheim, and injects his own anecdotes. He mentions, for example, how Stephen Sondheim called him an a**hole wjhen he met him in Vancouver.

Mooney is an expert in musicals, and in this show, he picks the right singers to singthe different Broadway songs. Although Sondheim is recognized for writing some of the finest musicals of the last 60 years, including Sweeney Todd, Company, Sunday In The Park With George, and the current Golden-Globe-nominated film Into The Woods, he doesn't seem to come up with a tune that makes you whistle after a show, unlike the greats Cole Porter, Gershwin and Rogers/Hammerstein.

The only song that I feel got him successful was "Send in the Clowns", whereas all the others are so-so. Cathy Wilmot did a beautiful and moving rendition of this song in the second half. The other song that perhaps can get you whistling a bit is "Comedy Tonight", the intro song of A Funny Thing Happened on the Way to the Forum.

But hats off to the performers Steffanie Davis, Ranae Miller, Cathy Wilmot, Braedon Cox and Rebekah MacEwan. Also kudos to Clare Wyatt who accompanied on the piano.