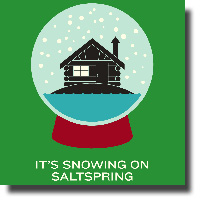 Nicola Cavendish's ironically titled play (it never snows on Saltspring, at Christmas, or any other time) hit the boards in its original form over twenty-five years ago. Ms. Cavendish recently returned to her typewriter (she may have had to upgrade to a word-processor) to update topical elements, without forsaking the show’s broad humour or charming, Dickensian storyline.

The play opens with Bill Bannister (Andrew McNee) lounging on the couch, channel-surfing. It’s Christmas Eve, but Bill is hardly in the mood for Christmas spirit. He’s picked a bad time to lose belief in himself and have anxieties over ‘Daddy’ issues. Bill’s vivacious wife Sarah is very, very pregnant, so Bill could become a first-time father any day. It’s a prospect that has paralyzed his frame of mind, since his own father never provided a worthwhile example of fatherhood. Sarah (Juno Rinaldi), is largely supportive of Bill’s crisis of confidence and tries to reassure him. However, when he underhandedly goes about marketing their newly renovated home, even her patience is tested.

It ultimately takes a nocturnal visit by a corpulent guy in a red suit to get Bill out of his self-inflicted doldrums. Whether it be a dream, a fantasy, or just something he’d eaten, Bill finds himself wearing his childhood pyjamas and everyone talking in rhyming couplets at the North Pole.

Andrew McNee and Juno Rinaldi are perfectly natural as a couple in the middle of a Christmas crisis. They get solid support from Deborah Williams and Joel Wirkkunen as both their trusty neighbours and Mr. And Mrs. Claus. Beatrice Zeilinger, who played Sarah in an earlier mounting of the show, brings much of the comic relief as the quirky realtor, Bernice Snarpley and Santa’s cranky elf, Grindle O’Darby.

Ted Roberts' first act set of the Bannister’s comely pre-Christmas, living room with its smoking wood stove and opening windows, gives the marked impression of being just a few feet in front of a winter wonderland. The second act set of Santa’s chaotic depot features a working belt conveyor discharging colourful gifts into the rear of a sleigh.

Snowing on Saltspring is gift-wrapped seasonal, feel-good fun complete with the requisite aphoristic message that (hopefully) leaves audiences with the true meaning of Christmas.