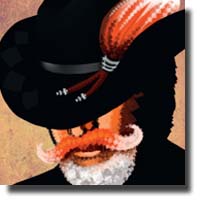 This play gives a snapshot image of San Francisco in the gold rush of the 1850s through the lens of Foxwell J. Sly (Adam Kozlick), an impostor hoping to rob a city blind of its gold grubbing greed behavior. His partner in crime is Simon Able (Andrew Harvie), an unfortunate high-roller, who is in a debt of servitude to Foxwell.

The play is a comedy; many jokes amongst cast members make for a refreshing and rewarding experience. Capilano University's theatre department has done a great job of accurately finding roles that fit each actor. The characters, including the minor ones, such as Sly's assistants or the stenographer in court, all have fantastic costumes.

This was a refreshing production.There are a lot of great moments in this play. Voice projection and stage movement showed confidence in the actors . A lot of thought and care was shown in their movements, especially with their quirky gestures. For instance, Craven appeared to be a somewhat John Cleese in-training with his slick brown hair, walking with stress-induced tics reminding me of Monty Python.

Jethro Crouch (Robbie Carley), although a bit "limited" with a cane, was able to age his character while maintaining a sense of self-ridicule. The audience enjoyed his performance. The show-stealers, however, were Mr Truckle (Graeme Thompson) and Mrs Truckle (Laura Miller) . Mrs Truckle is portrayed as a devout Christian while her husband is far from Christian-minded. He decides to barter his wife to settle his sins of greed. Sadly, the weakest role was that of Miss Fancy whose fabricated accent didn't quite make it as she delivered her musical solo number.

Once all of the offers had been placed, Sly and Able decide to connect the dots between the imbeciles to satisfy their greed. They convince all counterparts to surrender their most prized golden possessions. But eventually, however,they are caught.