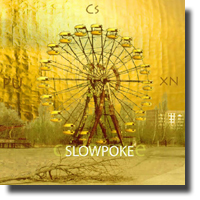 Slowpoke tells the story of a journey in 2011 to the Chernobyl Exclusion Zone using multi-media, dance and drama. Despite worldwide media coverage and concern, long term effects are still being accounted for in Chernobyl for Acute Radiation Sickness. 500,000 workers were involved and the cost of the cleanup is estimated at 18 billion rubles.

Billy Marchenski and Allison Denman produce an interactive performance amongst random audience members with a slide projector, vodka, chicken Kiev, and the sounds of a yellow handheld Geiger counter.

The pair first describe their journey arriving in Ukraine by plane. Where they stay contrasts their East Vancouver lifestyle. They talk about the countless homeless elderly babushkas who have a monthly average income of only two hundred Canadian dollars, and the lifestyle that this lowly income will afford. They describe through silly silhouettes their companions on the trip and what is required to travel into the zone, how they arrange travel, costs and transport aside from reactions about their trip idea from close friends and families.

This play has a simple set: a banana, vodka, a slide projector, and chairs. The audience is transported to the Exclusion Zone. Prior to arriving into the zone, they are forced to sign waivers and consent to not taking any photographs. A guide, Dennis, casually leads them and allows them to walk around in the Entertainment Facility for only thirty minutes.

After the show, the performers met and mingled with the audience, an extra plus in this production. The play deals with a challenging topic and is worth the risk seeing!