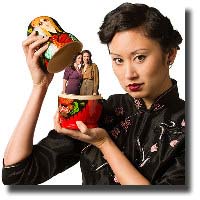 Sisters is Gateway Theatre’s artistic director emeritus Simon Johnston’s re-imagined version of Anton Chekhov’s enduring masterpiece, Three Sisters. He re-locates the action to a garrison town in China, a country he is familiar with, having been born and raised in Hong Kong.

Sisters is essentially about two sisters, a brother and a sister-in-law; set in 1939, roughly half way through the military conflict of the Chinese Civil War between the Kuomintang and forces of the Communist Party. The Protopov sisters, Masha and Irena, are bourgeoisie Muscovites and yearn to be back in their homeland. Unfortunately, family funds are rapidly diminishing and the relationship with their brother Andrey (who is frequently spoken of, but never seen) and irksome sister-in-law Natasha is starting to strain.

The play begins with the youngest sister, Irena (Luisa Jojic), celebrating her ‘Name-day’ (more religious than a birthday). Irena considers herself an aspiring actress, and with Capt. Wong (John Ng) rehearses a pièce de théâtre to be performed later in front of guests. Irena begins to show frustration not only at Capt. Wong’s inability to remember his lines, but also because none of the invited guests have yet arrived.

The young Irena learns shortly after what her siblings were already cognizant of: that there is no money left for the exorbitant lifestyle to which the family has grown accustomed. This revelation changes the social dynamic within the household. Natasha (Josette Jorge), a local girl and former servant whom Andrey marries, has thus far been considered less than equal by the Protopov family.

As the play progresses, the Protopov sisters are gradually made to feel aware that Natasha is no longer part of their world – they are part of hers. When a suspicious fire destroys the orphanage in the middle of Act Two, it leaves them even more vulnerable, while favouring Natasha’s grip on power.

Despite Johnston’s exiguous dialogue relative to many of Chekhov’s translations, he has done an excellent job of reinvigorating this play. He juxtaposes fragments of humour against a traffic backdrop, while retaining the spirit of Chekhov's original play.

Sarah Rodgers directs with a surprising fluidity for a world premiere. The common difficulties that can befall an opening performance of a brand new play are essentially eliminated.

I was particularly impressed with Ms Jorge as the central protagonist. She portrays with obvious relish the churlish Natasha the plundering of Masha and Irena’s dignity without asking sympathy from the audience. Luisa Jojic and Sarah Louise Turner appear to be ideally cast as the ill-fated sisters. However, in spite of shrill defiance, they each seem oddly compliant to Natasha’s autocratic demands.

John Ng acquits himself ably as Irena’s crestfallen suitor, instilling his character with a quaint mix of chivalry and foolhardiness. Donna White rounds out the cast as the family’s loyal housemaid Anfina.

It is always a thrill to be among the first to attend a new Canadian play, especially when it is as deeply moving and thought provoking as this one.