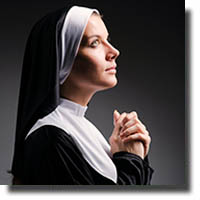 From what I see in Playwright Shawn Macdonald's bio is that he grew up a Catholic and even took courses in Philosophy and Theology at a Catholic University in Nova Scotia. Like many disillusioned Catholics, including priests, he probably left the Catholic religion after reading books such as Tom Harper's Pagan Christ, which puts a new twist to Christ's divinity and even existence.

For Catholics and Christians like myself, this play is disturbing. It deals with the non-existence of Christ, or Christ as a myth passed down from paradigms of Ancient Egypt. In his notes, Macdonald refers to finding "something that makes sense...gives us comfort. The opinion or belief becomes so important to us, that without it we feel lost".

Faith is really difficult, and the expression "leap of faith" which is different from "blind faith" is something Christians struggle with, especially intellectuals. So sometimes it's good to be a simpleton, then faith is easy to come by.

Throughout this play, all three characters grapple with the question of faith. Even Sister Judy (Jenny Wasko-Paterson) towards the end starts questioning her faith. Fr Frank (Mike Wasko) decides to leave the priesthood to escape the drudgeries of rituals a priest has to go through everyday. He feels liberated leaving his vocation.

Ruth (Lily Beaudoin) is a young student at this Catholic College and enrolls in Sister Judy's course. We find out why around the middle of this 120-minute no-intermisssion drama that she's not a Catholic and doesn't believe in Christ's existence. And another shocking revelation (which as a critic I'm not to divulge) happens regarding her relationship with Sister Judy..

Although I found this play disturbing, as it puts a negative note to Catholicism, I found the production superb, thanks to the guiding hand of seasoned director Patrick McDonald. The actors were flawless in their delivery of lines, and the pacing was excellent. Kudos to Arts Club who, through Bill Millerd, announced that this was the last opening night at the Revue Theatre as the venue will be moved to a new theatre on West 1st. David Cooper took the final shots of the audience as we all posed raising our hands before the play started.