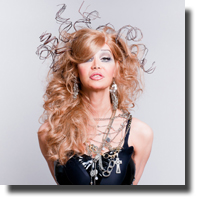 The Silicone Diaries is a one-of-a-kind, one-transwoman play created and performed by Nina Arsenault that chronicles her own journey from a pretty average man to an exquisitely beautiful woman. Wearing a grey latex dress that fits like a second skin, fishnet stockings and a honey-blonde wig Arsenault rarely speaks above a whisper. She recounts the transitioning experience that included body re-sculpturing with silicone, gender reassignment, hormone replacement and rhinoplasty (nose remodeling).

With only a chrome and white leather chair and a chrome drink stand, Ms Arsenault slinks and squirms around the stage with exaggerated femininity that once one gets used to it, doesn’t seem so unnatural. Of course, not too many people could sit and listen to someone talk about their silicone injections for the best part of an evening, but this now full-time female single-handedly holds the attention of (even mesmerizing) an entire audience non-stop for 105 minutes. In part, this can be attributed to the way she looks. She’s tall and slim with an ideal hourglass figure, the outline of which can be seen through her translucent dress.

What makes Arsenault’s story so captivating is that all the anecdotes are real events and the characters she describes are real people. Like the “girls” she refers to as her “silicone sisters” who together risked their health by slipping into a hotel in the U.S. to negotiate black market silicone from another transsexual who was neither a doctor nor a nurse.

Arsenault frequently manages to inject humour into her performance. Like her encounter with rock musician Tommy Lee in a Toronto restaurant. When she attracted the attention of the former Mötley Crüe drummer and invited to sit on his lap, she was under the influence of (the drug) AtivanTM and loaded with several glasses of champagne which lessened her inhibitions. Tommy still probably doesn’t realise that he was smitten by a transsexual.

The Silicone Diaries doesn’t directly advocate plastic surgery and Nina Arsenault doesn’t solicit sympathy from her audience. Perhaps after seeing her show you might be able to understand what has driven her to become the woman she has visualised herself to be.