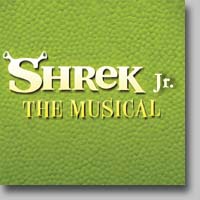 What a talented group of kids! I'm sure most of them will go on to study Musical Theatre at Capilano University. I believe it's the only university with a Musical Theatre programme. A lot of graduates have moved on and acted in many productions in Vancouver which is fast becoming the Musical Theatre of Canada.

This musical adaptation is based on the DreamWorks Animation Motion Picture and the book by William Steign. The music is by  Jeanine Tesori, and the Book and Lyrics is by  David Lindsay-Abaire.

It's a short musical, just over an hour, and is meant for children, as it deals with fairy tale format. Shrek finds his swamp invaded by banished fairytale misfits, runaways who've been cast off by Lord Farquaad. When Shrek (William Fergusson) sets off with a wise-cracking donkey to confront Farquaad, he's handed a task: if he rescues feisty Princess Fiona from the Dragon-guarded tower, his swamp will be returned to him.

The children watching the matinee performance enjoyed the show. I was with my 7-year old granddaughter and she particularly enjoyed the shenanigans of the wise-cracking donkey (Ashley Pistilli), and the singing of Fiona (Julianna Doyle).

Kudos to Youth Conservatory Program Director Kimberly Markarian and the production staff for a delightful show. .