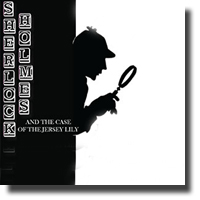 Theater Crossing Co-op
Sherlock Holmes and the Case of the Jersey Lily by Arthur Conan Doyle, adapted by Katie Forgette

Incorporating the characters of Langtry and Wilde invites the audience to accept the play as some sort of historical theatre, but while Seth Little is delightfully foppish as the famous playwright and Corina Akeson offers a convincing portrait of the charismatic actress, the events within the storyline (with the exception of Edward’s dalliance with the actor) are entirely undocumented.

The play begins with Holmes and Watson contemplating the day in their digs at 221B Baker Street. Enter Lillie Langtry who attempts to convince Holmes that she is applying for the position of his housekeeper. When the subterfuge fails, Oscar Wilde joins her in presenting the detective with what would seem to be a simple case of third-party blackmail. But when Sherlock Holmes’ extraordinary powers of deduction are availed, a much more sinister plot is surely predictable.

Brent Fidler works hard to put his own stamp on Conan Doyle’s famous detective, though the influence of Jeremy Brett who played Sherlock Holmes in the Granada Television series is unmistakable. Tim Bissett is appropriately gallant as Watson with just the right amount of camp. Alas, his role is underused in the second act. Bill Croft is suitably tongue-in-cheek as ‘a villain in a comedy’ Moriarty. I really liked Matt Loop and Mia Inglmundson; as Moriarty’s peons, they are more mischievous than villainous.

Director William B. Davis (Cancerman from the X-Files’ television series) seemed to have got a smart response from an excellent cast who didn’t allow their characters to become caricatures. Davis also ensured that the play didn’t degenerate into an obvious satire.