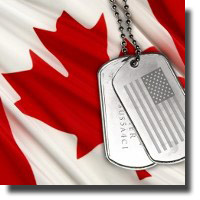 Conscientious objectors, draft dodgers, war resisters – aren’t they all pretty much the same thing? Well, not really and Peter Boychuk’s new play Shelter from the Storm goes some way in defining the difference. Boychuk’s three-handed Canadian drama about three Americans is as current as this morning’s news. The playwright takes some of his inspiration from Rodney Watson, who, three years after his deportation order still resides round the corner from this theatre.

Set in Tofino, on the west coast of Vancouver Island, Rick (Peter Hall) was one of thousands of Americans who burnt their draft cards, came to Canada to seek refuge and stayed. Through a network of individuals who provide help to war resisters, he is called upon to give shelter to a young marine traumatized by action in the Afghanistan war theatre. Unlike his older compatriot, Scott (Kyle Jespersen) enlisted in the military of his own free will and obediently complied with his initial tour of duty. But after experiencing the horror of war, he decided to flee to Canada rather than face another tour. But is he a coward or a man of conscience?

Caitlin (Lindsay Winch) is Rick’s daughter; an expert surfer who has been offered valuable sponsorships to attend a university in California. Rick, recently widowered, is keen for her go and continue with her studies – Caitlin however, is reluctant.

When Scott arrives at their home, there is palpable antagonism between him and Caitlin which quickly transforms into ardour. One of the play’s more obvious flaws is the suspension of disbelief required to accept Caitlin’s demeanor towards Scott’s predicament. She goes from cynical to compassionate in the space of a single nanosecond and from compassionate to passionate in about the same time.

Rick, on the other hand, is initially benevolent towards his guest, but as he observes the extent of his daughter’s emotional attachment, his manner becomes less charitable.

Peter Hall as the flexuous and overtly nostalgic Rick arguably draws the most sympathy for his character. Lindsay Winch, who chose this production for her professional debut, acquitted herself well as the belligerent Caitlin and she certainly looked good in a wet suit. Nonetheless, she didn’t quite seem to have the flexibility to display all the emotions that her role demanded. Kyle Jespersen in the central role of Scott the errant soldier and occasional narrator was a little too single dimensional. He certainly showed all the anger that we might expect from an emotionally scarred combatant, but he carried the character’s outrage into the softer moments of the play.

Director Katrina Dunn brought a high level of quality to the production and maintained an even, easy-to-follow pace throughout. Too bad she wasn’t able elicit more likability from her two younger actors.

Scenic designer Pam Johnson put together the most detailed staging I’ve seen at the Firehall (or any other community theatre) in a long time. Johnson’s set comprised of a rustic wood shingled house complete with stoop and adjacent barn. I’m pretty sure I could smell the old wood on entering the theatre.

Despite some shortcomings, there is much for audiences to enjoy in Shelter from the Storm. Not least an interesting premise that causes its audience to contemplate on a contraversial issue. I would consider it to be a brilliant work in progress.