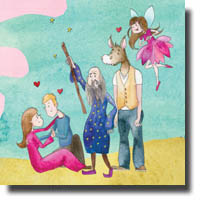 Adapted by Mike Stack from the works of William Shakespeare and the Shakespeare Can Be Fun series (Firefly Books) by Lois Burdett, this show meant for young audiences attempts to present Shakespeare's A Midsummer Night's Dream, Romeo and Juliet and The Tempest in 60 minutes (20 minutes for each play).

You just can't do that. The plots and subplots are too complex that if you attempt to reduce a 5-act show which usually runs for three hours, into 20 minutes, you get an audience confused on who's who and what's going on. When four characters play 20 characters, you're apt to get the audience confused, especially a young audience. In the first place, Shakespeare isn't meant for a young audience. What 5-year old can understand the complexity of Romeo and Juliet? What 4-year old can comprehend romantic love?

Then there's The Tempest and Midsummer Night's Dream. These are complex comedies with intricate plots and confusing subplots. You'll end up confusing the audience, adults and children alike. Although I don't agree with the concept of adapting Shakespeare to young audiences, I must admit that the acting was quite good. The actors Leslie Dos Remedios, Dustin Freeland, Kayvon Kelly and Anais West managed to get a few laughs from the children as they clowned around the stage.