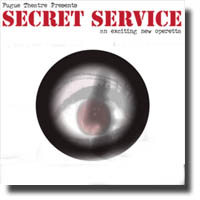 In these days of nostalgia, even the operetta is beginning to surface as a contemporary genre. A take-off from the biting operettas of Gilbert & Sullivan, Secret Service is a parody on the CIA, M15, KGB and other spy organizations.

I was quite ambivalent as I watched this operetta. Mind you, the voices were excellent, truly operatic, but I was disappointed with the music which somewhat followed the "new wave" style of composition which most of the time time didn't sound harmonious. I'm also a bit wary about operettas where both dialogue and opera singing are involved. Unless it's a Gilbert & Sullivan, I'd rather have straight dialogue, ie, a comedy, or straight opera, but nothing in-between, unless it's a Broadway-style musical.

However, I do admire the Fugue Theatre for attempting to do this genre which, I believe, hasn't yet been tried by other theatre companies here in Vancouver.