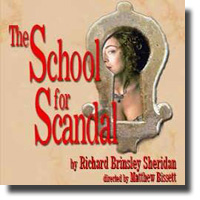 United Players
The School for Scandal by Richard Brinsley Sheridan

The School for Scandal is a comedy of manners designed to explode the myth that nothing is nearly as scandalous as profligacy by contrasting it with the hypocrisy of vanity masquerading itself in the genuflecting garb of feigned generosity and voluble virtue. If avuncular and genial arbiters of character can be made to wink at youthful indiscretions while the audience laughs good-naturedly at their folly, the same cannot be said for the inimical words and pernicious actions of those inhospitable enough to wilfully forget that more is expected from those to whom much has been given.

Hearing scandalous stories sometimes brings out the worst in people (sometimes the best), and long before satiric song-writers such as Don Henley were skewering practitioners of yellow journalism with popular rock ballads like Dirty Laundry, Richard Brinsley Sheridan was setting the stage afire by satirizing the gossip-mongers of polite London society with his 18th Century five-act play The School for Scandal.

An elderly gentleman, Sir Peter Teazle, marries a young farm girl and they take up residence in London society. He is the guardian of three other young people—one gentlewoman, Maria; and two brothers, Charles and Joseph Surface. Joseph has designs on Maria, but she seems to prefer Charles. Their neighbors—Crabtree and Backbite—led by the aptly named Lady Sneerwell, are horrible gossips who have enmeshed Joseph in their machinations and have also begun to influence young Lady Teazle who, much to Sir Peter’s chagrin, just wants to fit in with the fashionable set. This situation is a rich source of humour as the audience becomes privy to the various domestic arguments of the Teazle household.

Charles is wild and apparently dissolute, and through gambling and other vices he has squandered all of the money his old benefactor—a rich absentee uncle named Oliver—has been sending him. Sir Peter favours the elder brother Joseph who he characterizes as a man of good breeding and propriety, but it is questionable as to whether or not his moralizing tendencies are merely a veneer of virtue.

When Uncle Oliver suddenly comes to town, he and Sir Peter devise tests of loyalty and generosity to find out the truth about which of the two brothers is more trustworthy. Since neither of them has seen their uncle for sixteen years, he is able to appear before them in disguise without being detected—first as a money lender to Charles, and later as a charity case to request a loan from Joseph. Several flourishes of dramatic irony appear in these amusing segments of the play.

Meanwhile, the scandal-mongers circulate rumors and innuendo about how Charles is supposedly romantically involved with Lady Teazle. When the truth about this and about Joseph is finally revealed in a totally unexpected and altogether hilarious turn of events, everybody is quite surprised! During the ensuing action, even more outrageous rumors surface about Surface and the Teazles, until scandal itself is ultimately schooled, and Charles the wild card delivers the final killing word to the (hopefully approving) audience. With The School for Scandal thus ended, the true ends of the educational experience can be gleaned: One need only plumb the theatrical depths beneath the surface to avoid the pervasive narcotizing dysfunction perpetrated by modern media Crabtrees, Backbites and Sneerwells.

The United Players production is cleverly staged using an ingenious framing device designed by director Matthew Bissett—massive picture frames are suspended at various key locations around the stage, enabling the actors to appear in unique poses as living portraits within craftily constructed frames.

Caitlin Clugston’s Lady Teazle is by turns impudent, vivacious and as coy as she is fickle; she brings a boundless energy to her spirited, headstrong, impetuous character. Linden Banks invests his Sir Peter with a manic energy, and the excellent chemistry between he and Clugston make it easy to see how an old bachelor would sacrifice his freedom to marry a lively young farm girl.

Michael Wild lends more than an air of authenticity to his role as the sycophantic, conniving, manipulative, and pretentious Joseph Surface.

Paul Kloegman is competent in his portrayal of the affable absentee uncle Sir Oliver who amusingly manages to be present while supposedly absent, making for much of the good humour that transpires between the dishevelled Charles (Matt Loop) and the disdainful Joseph Surface.

Mika Laulainen stands out among the other minor characters as Sir Peter’s young ward Maria. Her energetic portrayal of a petulant young girl is refreshing and enjoyable to watch.

Catherine E. Carr’s costumes bring this period piece to life, Graham Ockley shows great finesse in a complex lighting design, and Neil Griffiths is to be commended for an original sound design. You will not want to miss seeing one of these performances, because there is much to recommend in this production of The School for Scandal. Happy 55th anniversary to the United Players.