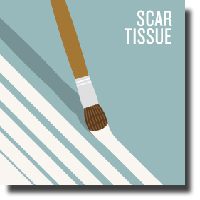 Arts Club Theatre Company
Scar Tissue by Dennis Foon, based on a novel by Michael Ignatieff

Aging gracefully inevitably involves struggle. More so when your mental faculties seem determined to thwart you at every turn. Scar Tissue is a dynamic exploration of the effects of Alzheimer’s disease upon a gifted artist and her immediate family. Sibling rivalry takes on a prominent a role in Dennis Foon’s terrific adaptation of Michael Ignatieff’s novel as the inevitable marital disjunctions that arise during the aftermath of Mary’s diagnosis of dementia play themselves out.

This play is a mixture of memory and desire. Favouring David’s point-of-view as Mary’s favourite son, Foon’s adaptation presents a series of powerful vignettes that encapsulate some of the families most visceral and vivid moments. Craig Erickson imbues David with a gnawing and insatiable need for closure mingled with an almost inchoate fear that he may one day share his mother’s fate. David’s grudging respect for his father nearly mutes every hint of the almost Oedipal overtones hued behind the difficulties he experiences in his relationship with his wife Anna, underplayed with admirable intensity by Megan Leitch.

Few mother faces Alzheimer’s alone. Gabrielle Rose’s Jessie-worthy performance as Mary makes personal dignity a salvageable grace, lifting it on tender hooks from the embarrassing clutches her character’s vain repetition. Ms. Rose is a marvel to watch. Her warmth and vitality suffuse Mary with a poignant humanity, whether she is demanding a spatula for the umpteenth time though it hides in plain sight, or glibly recollecting accretions of decades-old-detritus to settle one of her sons’ arguments.

Amid the fragmented pastiches pulled together in this fight of her life, Gabrielle Rose’s family members must play foils to her consummate disintegration. Tom McBeath breathes understanding and compassion into his role as her long-suffering husband, Alex. Haig Sutherland lends an air of cerebral authenticity to his portrayal of David’s brother Nick, the good doctor who has analyzed everything every which way. Finally, rounding out the cast as the youngest member, Kelk Jeffery proves there are no small roles as David’s son Jack. This play provides a well-rounded and intense view of why this debilitating disease drives families apart as often as it brings them together. But for all that, Scar Tissue has its own brand of humour, and that is just one of the brilliant flourishes that makes it an even more authentic enactment of how Alzheimer’s affects family relationships.