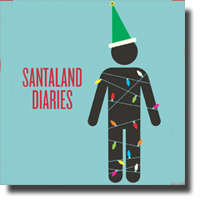 The Santaland Diaries by David Sedaris

The Santaland Diaries is a hyperkinetic monologue of David Sedaris’ personal version of events while working as an elf in Macey’s Santaland at their New York City department store in 1991. As with much of Sedaris' humour, it’s sardonic, satirical and self-deprecating.

Toby Berner delivers the narrative in the form of a constant flow of anecdotes. Starting with being jobless in NYC, answering Macey’s newspaper advertisement, then having to present himself for two grueling interviews and a urine test just to be one of Santa’s minimum wage gofers. After the prerequisite training - yes, you do need to be trained for a career as an elf – Crumpet (a name he chose himself), was assigned to a succession of menial positions in some unseemly locations like the nauseating ‘Vomit Corner.’

As Crumpet, our hero was constantly required to act cheerful even when getting switched around from duties such as: photo elf, usher elf, counter elf, exit elf and the most boring station of all - island elf. Being a full-time altruist can really wear down the best of elves – and Crumpet wasn’t the best.

Being steadily besieged by bratty children and parents with a heightened sense of entitlement while dressed in ridiculous candy-striped tights and a forest green tunic is surely enough to undermine anyone’s self-esteem. When you add the humiliation of being addressed as “little elf” and coerced into singing carols by an imperious Santa, who can blame Crumpet for such mischievous misanthropy.

Toby Berner is solid as the cynical Crumpet, though his performance is hardly effortless. Berner works up an honest head of perspiration relentlessly shifting scenery round the stage without much apparent purpose. He recovers some of his composure when moderating the frenetic pace after changing into his elf uniform twenty minutes into the show.

David Sedaris’ humourous journal offers a terrific antidote to the usual saccharine Christmas. And who of us has never had to take a job we didn’t want because we were broke.