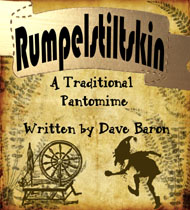 In this British-style influenced Pantomime, where men play women and women play men, playwright Dave Baron comes up with a James Bond spoof, with all his corny jokes poking fun at Adrian Dix and the Mayor of White Rock, changing the Bond names such as Goldfinger to Goldringer, and other one-liners connected to Bond movies.

The panto takes place in Eidelweiss Rock, somewhere in Bavaria. Director Susan de Pencier with the help of Musical Director Shelley Eckstein and Vocal Director Michelle Reid get all the cast members young and old singing and dancing songs with lyrics made up, from popular songs such as "Stand by Me" and to the choreography of Lena Dabrusin. Technical Director Matthew Davenport also makes a cameo appearance shaking his head in disapproval saying "Actors!"

In this spoof, Jimmy Bond (Kirstin Stewart), who looks sexy with his/her leather pants faces a dilemma. He must rescue his love, Penny Money (MacKenzie Claus), who is perfectly cast as the innocent and naive blonde blue-eyed stereotype, from the scheming Goldringer (Ray Van Ieperen) who is dressed all in gold and thinks of nothing else but gold. Van Ieperen is indeed a comic actor with his quips and movements. His henchmen, Rocky Racoon (Jennifer Tiles) and Jack Russell (Elyse Raible) also did a superb job playing their roles.

Then, the dastardly Rumpelstiltskin (Hunter Golden) who is well made-up and dressed and did a great job acting as a villain appears from nowhere to help Penny Money convert straw to gold so that she can be released by Goldringer. The catch, though, is she has to surrender her first born child to him, to which she agrees.

In the second act, Jimmy and Penny are happily married and so are Goldringer and M the Dame (Bryce Mills), Jimmy's mother, who really is the star of the show and carries the panto from start to finish. But lo and behold, Rumpelstiltskin suddenly appears from nowhere to claim what Penny promised. She begs him, however, not to take her child, and so, after all, he has some heart left and gives her one last chance. The condition is if she can guess his name within three days, he'll let her off the hook.

Jimmy and Shenanigans (Celeste Taylor, Amy Goheen), a mechanized giraffe created by Q (Nigel Watkinson) and which got a warm applause when its eyes lit up, go and spy on Rumpel. We see him in the next scene with his slave children as he pepares to eat one of them. Jimmy hears the name Rumpelstiltskin uttered by this villain.

When the third day comes around, he goes to ask Penny for his name or the child if she doesn't get the name right. And just when Penny is about to give up, our hero Jimmy shows up late as usual, and his excuse is he was stuck in the roundabout traffic on 16th Ave. We all laugh, of course, because we know how congested the traffic is in White Rock.

The plot thickens when we find out that Rumpelstiltskin was actually Manny, the ex-husband of M the Dame, and he was put under the curse of witches Grisabella (Patte Rust) and Marguerita (Dianna Harvey). The third witch, Belladonna (Krystle Hadlow) is actually a spy witch and she dons her witch costume and we see that she's dressed as a sexy cat. Hadlow is a natural, and she has excellent rapport with the audience because of her charismatic stage presence. Playwright Baron with this character again makes a spoof of the musical Cats.

So after being threatened by Belladonna, the witches take the spell out of Manny and he recognizes his ex-wife M, congratulating the jealous Goldringer on his marriage. Everyone is happy at the end, and the cast sings "We wish you a Marry Christmas" at the end of the show, and as is customary, all the chracters parade down the aisles and wait for the audience to thank them for attending the panto, as they distribute tiny Christmas candy canes to all the kids at the lobby, thanking everyone for coming to the panto.

Although the show is 2.5 hours long (with intermission) kids young and old enjoyed especially in booing the villains and applauding the good guys. In most community theatres in the lower mainland, the panto is a tradition during the Christmas season.