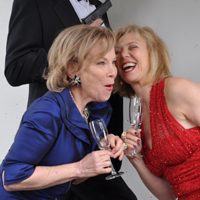 Rumors (or Rumours if you prefer the Canadian spelling) is a parlour room farce by New York playwright Neil Simon – the only one he ever wrote. Simon created the play at a time of personal turmoil. He was going through his first divorce with Diane Lander. The couple eventually got back together, only to divorce for a second time. This anxiety in his own life is reflected in the tensions seen in the five fictional couples in the play; even the one that the audience never gets to see.

The action starts when Ken and Chris Gorman (Keith Martin Gordey and Camille Mitchell), the first of four couples, to arrive at the New York home of Charlie and Myra Brock to celebrate their tenth wedding anniversary. They have already heard a gunshot, and so have entered the home to discover the servants and Myra are missing, and Charlie is bleeding from a gunshot wound to his ear.

The farcical situation develops as Ken and Chris attempt to conceal the truth about what has happened (they don’t even know the circumstances themselves) from couples arriving later. As each guest arrives, they form an entirely different perspective of what has transpired.

When I saw that this was going to be a script-in-hand performance, I was concerned that the process of referring to a script could discompose the spontaneity that a good farce requires to make it a success. I needn’t have worried. There was hardly in lack if fluidity or comic timing in the performance. Matter of fact, I never noticed if Bob Frazer even glanced at his script and Jerry Wasserman, who seemed to at least partly influenced by Woody Allen’s self-deprecating acting style, delivered his character’s second act disquisition with complete abandon.

Jerry Wasserman as Lenny and Melissa Oei as the droll spouse Claire were probably the closest to being a real couple on the stage, turning in truly believable performances. Annabel Kershaw and Bob Frazer as Cassie and Glenn Cooper were the last couple to arrive and despite appearing to be the least likable characters, handled their roles with aplomb.

Glenn MacDonald’s well-constructed set may have lacked the furnishings expected of the home of the deputy mayor of New York, but it maximized the space available and never looked crowded. The programme didn’t acknowledge a costume designer, so it must be assumed that the actors took care of their own elegant clothing.

Theatre-goers familiar with Neil Simon’s body of work will not likely consider this play as one of his best. However, Rumors a fun show containing lots of laugh-out-loud moments, thanks largely to skillful direction and some excellent performances.