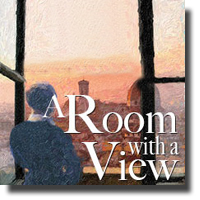 United Players
A Room with a View by E.M. Forster, adapted by Roger Parsley & Andy Graham

There are few stage plays that do as great a job of conveying the essence of the original novel on which they are based as Roger Parsley and Andy Graham’s masterful adaptation of E.M. Forster’s A Room with a View. United Players is currently presenting the North American Premiere performance of this excellent play, and it is well worth seeing.

Social customs were somewhat less confining during the first decade of the Twentieth Century than they were during the Victoria Era. A Room with a View explores how the confines of civility are affected by the spirit of independence during the Edwardian period within the context of a coming-of-age drama centered on young Lucy Honeychurch.

Emma Middleton inhabits her lead role as Lucy with voluble poise and an impressive personal presence that shows her character’s depth of feeling and spirit when caught on tender hooks between the pinions of passion and independence and those of custom, diplomacy and tact.

Helen Martin is utterly convincing in her role as Lucy’s chaperone in Italy. Her psychological games are delivered with such deft inflection that one is at first merely amused, while only fully appreciating the full purport of her ironic intent near the end of this charming play.

Graeme McComb makes his character George Emerson’s restless independence resonate with a paradoxical steadiness. When he shares his epiphany after the Italian incident, it is as natural as a cloudburst.

Alex Pangburn may well have taken a page out of Daniel Day Lewis’ performance in the film adaptation of the novel which forms the basis of this play. Pangburn’s rendition of Cecil Vyse has just the right amount of preen and polish to suit this refined, simpering, bookish man of manners.

Mitch Hookey exudes a boyish charm and robust kinetic energy, coupled with a mischievous spirit that brings his Freddy Honeychurch to life with a kind of zany ebullience that is fun to watch.

There is a beautiful sense of an innocent age captured in this stellar enactment of what is an amazing play, and this is a premiere performance you don’t want to miss.

Memorable and noteworthy performances were also given by James Gill as the unctuous, but likeable Mr. Beebe; by John Harris whose hypocritical, sniping parson Eager is eminently watchable; and by Louise Phillips’ Miss Lavish, the author whose art most imitates life. Phillips is rich, radiant, energetic and committed in her role as Miss Lavish.
Daniel Deorksen does an admirable job of accompaniment on the guitar, and Phyllis Ho’s violin also adds a pleasurable dimension to the performance.

One final comment on the nudity in the production: The nude bathing scene is not only tasteful , it is a refreshing hearkening-back to an era when such good-natured humour, frivolity and frolicking was an earmark of innocence and joy, and to see this play is to take part in a rare experience of joy.

Director Sarah Rodgers ought to be very proud of every aspect of this production.