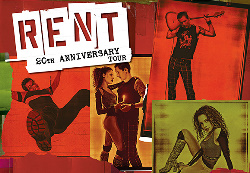 Rent is the late Jonathon Larson’s rock musical adaptation of Giacomo Puccini’s 1896 opera La Bohéme, set in the Latin Quarter of Paris. As with the original, Larson’s version dealt with some disturbing issues without apology. The ode to AIDS, homelessness and homosexuality as experienced through sick, young people, gained extra focus when the author died suddenly just before its New York opening.

But that was twenty years ago. With its central issues now less of a public concern, Rent is now considered to be a period piece, though it has been updated from the original with this Evan Ensign staging. Rent still manages to explode with energy, exuberance and raw talent that likely come from the established credo of bringing to the stage young, eager artists.

Rent begins on a Christmas Eve in an industrial loft somewhere in the East Village, occupied, pretty much rent-free by Mark (Cody Jenkinkins) who takes on much of the incidental narration, and Roger, (Cole Eman Cummings) a self-pitying musician, attempting to write his own swan song. Through a series of telephone calls and miscommunications, the story follows Mark and the turbulent relationships of three couples, one straight, one lesbian and one homosexual - one half of which comprises of Angel (Joshua Tavares), a transsexual who manages to look completely normal wearing a Santa Claus outfit.

Kelsee Sweigard as the mercurial Maureen, is one half of the troubled lesbian relationship, disports her sexuality with confidence. Her first act performance of “Over the Moon” displays clever satire, though unfortunately, only mildly entertaining. However, her chemistry with her temperamental lesbian partner Joanne (Samantha Mbolekwa) provides the most dynamic relationship in the show. The pair really fizzle n’ sizzle with their passionate sparring in the second act song “Take Me or Leave Me.”

On the debit side, I felt that Angel’s death scene too surreal and didn’t fit with the play’s otherwise gritty realism. Also, solid performances on stage were let down by technical elements. Larson’s storyline is difficult to follow, with the narrative relying heavily on the song’s complex lyrics. This wasn’t helped by the production's sound system, which could have been much improved to allow the actors to be heard clearly. Lighting design was also at fault; performers were either seen in half light or glaring backlight. Even the spotlight on solo performances was weak.

Rent’s show-stopping songs like “Seasons of Love,” “One Song Glory” and “La Vie Bohéme” are still in the show. If you are looking for musical theatre with attitude - check out this touring production of Rent.