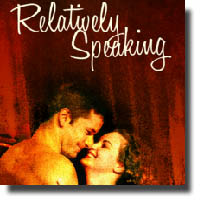 When Alan Ayckbourn opened his first play with any degree of success in London’s West End, he did so with Noël Coward in the audience. If the stylish playwright liked it, he must have concluded that imitation is indeed the most sincere form of flattery. The comedic technique derived from multiplying misunderstandings is blatantly gleaned from his own Private Lives.

Western Gold Theatre’s mounting, deftly directed by Anthony F. Ingram, sets the play in London, England around the time it was written – the so-called swinging sixties. Immediately the audience (even those privileged in seeing the play for the first time) suspects that Ginny (Stacie Steadman) is hiding something. It soon becomes so obvious that even Greg (Jay Hindle), her cohabiting, doltish boyfriend becomes leery.

Ginny’s whopping fib that convinces Greg she going to spend the Sunday visiting her parent’s home, though in truth, she is heading to the home of her older paramour Phillip (Terence Kelly) to put an end to the relationship. A combination of using only pronouns and the required precision of aligning who is on stage with whom creates utter confusion for the characters (and perhaps a section of the audience).

Ayckbourn’s central premise that Phillip’s wife Sheila (Anna Hagan) so readily receives a total stranger into her home and that Greg so easily accepts that Phillip and Sheila are Ginny’s parents requires a measure of suspension of disbelief. The play even ends with Greg still believing that Phillip is Ginny’s father (but hey, that’s British farce for you).

While essentially an ensemble piece, veteran actors Terence Kelly as an apoplectic errant husband and Anna Hagan as the long-suffering wife provide a master class in pace and comic timing. Jay Hindle arguably has the most difficult role. Nonetheless, his performance is needlessly over-the-top. Stacie Steadman is fine as the duplicitous girlfriend when playing off Hindle, though, somewhat underwhelming within the quartet setting.

Glenn MacDonald’s set of a London bed-sitter, with laundry hanging from indoor clothes lines and posters of sixties Brit rock bands adorning bare walls, has the effect of making the small stage even smaller. However, with the participation of the cast doubling as stage hands, the stage magically morphs from Ginny’s crowded living space to Phillip and Sheila’s Buckinghamshire open garden patio.

The double entendres and sexual innuendos are still good for plenty of laughs, but the four-and-a-half decades are starting to take their toll on Relatively Speaking.