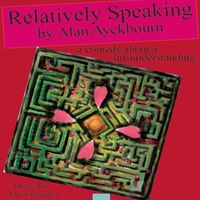 Metro kicked off its 50th season with this typical Ayckbourn comedy which was a commercial success in London's West End in the mid 1960s. Four characters, a middle-aged couple, Philip (Paul Fisher), Sheila (Alison Schamberger), and unmarried young pair, Ginny (Anita Reimer) and Greg (James Challis)-- interact with a series of misunderstandings and mistaken identities reflecting the French farces of the 18th century, based on the traditional commedia dell'arte of yore.

The actors were funny, the play was "well-made" (in Ayckbourn's own terms, on which I agree) , the direction was well-done, and the set was splendid. You'd almost think you were at London's West End watching British actors. The actors` Oxford accents were to the T, and their diction clear and crisp. This is the third time that Metro has done this play: 1978 where director John Crittenden was part of the cast and was directed by Johnny Dunca; then in 1989; and again this year. According to Crittenden in his programme notes, Ayckbourn wrote this play in 1967 and it was `dedicated to people who, when the summer holidays were ruined by rain, could come into the theatre and have a laugh`.

There were a lot of laughs indeed, as these players interacted and mistakenly took each other for different people. This play was chosen most popular play in Metro`s repertoire, and that was why it was chosen to open Metro`s 50th season.

I`ve fondly enjoyed Metro`s shows through the 15 years we`ve been reviewing their shows, and just to let our readers know, new comfortable seats have been installed in the theatre. They`re so comfortable that you might nod off a bit while watching a show. If you want your name inscribed on one of the seats, there`s a campaign from Metro charging only $50 for this.