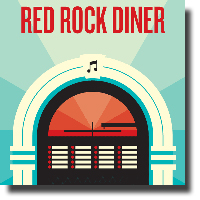 The Arts Club Theatre Company is ending their 50th Season on a high note by revisiting Dean Regan’s Red Rock Diner: A ‘50s Rock ‘n’ Roll Review, and this energetic production does a fine job of living up to its billing. Hearkening back to a simpler time, this play is loosely based on the early days of legendary deejay Red Robinson. Spending a night with this theatrical performance is actually a lot like watching the live taping of a long series of interrelated music videos that were produced in the 1950s.

This pseudo-MTV ambience is enhanced by the on-stage presence and inter-active involvement of the talented band, consisting of Mathew J. Baker on bass, Todd Biffard on drums, Jeff Gladstone on guitar, Steven Greenfield on keyboard, and Brett Ziegler on saxophone. These musicians occasionally take the spotlight to sing as well, but mainly form the backup group for the rest of the performers: Tafari Anthony is Richard; Neil Minor is Red; Anna Kuman is Connie; Zachary Stevenson is Val; and Robyn Wallis is Venus.

Neil Minor is Red, and he actually manages to sound a lot like a young Red Robinson; but Robinson would have been 20 in 1957, the year this play is set; there is just no holding back the years. Minor anachronisms are forgivable, as little peccadillos like imagining a beached whale at Kits are fodder for a radio frenzy, as the young deejay builds his fan base. There is the usual radio banter, and the troupe of actors occasionally do double duty as doo-wop jingle backup singers for the fledgling radio celebrity.

Director/Choreographer Valerie Easton has her hands full with this 47-song tribute to the early days of Red Robinson and Rock ‘n’ Roll itself. The music itself—the songs, the rhythms, the rock and the roll—all play a major part, but at the back of it all is the story of Red Robinson’s rising fan base and of the role popular music plays as a soundtrack for the age old story of hunky guys in hot pursuit of gorgeous girls.

Act One struts out extraordinary song and dance maneuvers: wonderful renditions involving rock ‘n’ roll classics such as “Great Balls of Fire,” Teenager in Love,” “Come On, Let’s Go,” “Johnny Angel,” and “Blue Suede Shoes,” to name a few. There were Hula Hoops and pogo sticks aplenty in the ramped-up version of “Wipe Out.” Hard to know what to watch, there was so much going on!

Act Two begins with some laughable satire as five protestors descend on the band playing “Tequila” for the 1957 King Edward Graduation Dance. It is hilarious to watch these protestors struggle to ‘practice what they preach’ as their rabid denunciation of this so-called “jungle music” devolves into sensual sophistry. What follows is a spirited talent contest that pulls out 28 of early rock ‘n’ roll’s best tunes, skilfully rendered. There is an amusing audience participation involving musical chairs. There are even a few lava-like libido Elvis moves as Zachary Stevenson does a fine job of channelling the King of Rock ‘n’ Roll himself. But the pièce de résistance is when the ensemble showcases its rendition of Roy Orbison's "Crying."

If you want a night to remember when Rock was young, save your appetite for the Red Rock Diner—the stellar performances of its principals provide a sumptuous main course and Darryl Milot’s fabulous costumes combine with Ted Roberts’ colourful set to create a rich theatrical dessert, amply enhancing the succulent flavour of this show. Congratulations Arts Club, on an excellent 50th Season!


An Interview with Red Robinson and cast member Zachary Stevenson

When the Arts Club Theatre Company opens a brand new production of Dean Regan’s retro revue Red Rock Diner at the Granville Island Stage next week (June 25) it will have special significance for British Columbia broadcasting legend, Red Robinson. Regan wrote the play about Robinson's early days in Rock ‘n Roll radio. However, it’s not so much Robinson’s biography, but rather a celebration of the phenomena of the Rock n’ Roll generation.

While still in high school in 1954, Robinson started working as a disc jockey at radio station CJOR and became the first disc jockey in Vancouver to play Rock n’ Roll music. He has since been recognised with numerous awards, including one I’m particularly familiar with (since I live there) – selection to North Vancouver’s distinguished citizenry. He also gave his name to the Red Robinson Show Theatre, until the owners, Great Canadian Gaming Corporation made the public relations faux pas of changing the name to ‘The Theatre.’

Recently, I was fortunate to join a conversation with Red Robinson and Zachary Stevenson in the reception area at the Granville Island Stage. I had first met Red at the 2003 mounting of Red Rock Diner at the Vogue Theatre and find that he still exhibits the same open charm and natural enthusiasm with strangers and old friends alike. He’s a virtual encyclopedia of popular music and enjoys sharing the many anecdotes that he seems to remember in detail.

In the 2003 mounting Paul McQuillan played Robinson; this time the role goes to Neil Minor, who had a small part in the earlier show. Red strongly approves the choice of Minor in the main role and when asked to compare the two productions, he stopped short of being critical of the former production, but anticipates the Arts Club mounting will be “three times better.”

Red belongs to a special breed of disc jockeys that includes Wolfman Jack and Casey Kasem who would set their show’s agenda and choose the music they played. Red warmly remembers meeting Casey Kasem, the American disc jockey who passed on June 15, this year. I asked the veteran broadcaster how much local radio format had changed since those halcyon days. “Tremendously, at sixteen I was responsible for building my audience. Nowadays, station managers select the music to be played and announcers just read from cue cards.”

Red has met just about every influential performer from Elvis to the Beatles and even struck up long-standing associations with some of them. After meeting Roy Orbison in 1962, the pair embarked on a friendship that lasted until the singer’s death in 1988. Red also has fond memories of getting to know Orbison’s first wife Claudette who inspired the song he gifted to the Everly Brothers. He wasn’t quite so enamoured with Barbara, his German-born second wife.

Apart from the connection with the forthcoming Arts Club show in which Zachary Stevenson has a role, both Red and Zachary were born on Vancouver Island. Red is originally from Comox while Zachary is from Parksville, roughly sixty kilometres south. They are also linked through Rock ‘n Roll innovator Buddy Holly. Red emceed his 1957 concert at the Georgia Auditorium, while Zachary has played Holly in multiple stage versions of The Buddy Holly Story.

The versatile actor/musician has had other roles, but understands Holly’s impact on music. While visiting Texas, he stopped over in Lubbock and checked out the Norman Petty Recording Studios. Zachary supports Médecins Sans Frontières and has helped raise funds through his recordings.