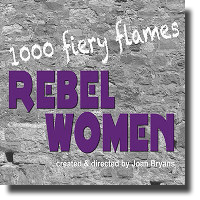 Only fifty years separate the Representation of the People Act being passed into law, which gave all women in Britain over the age of 21 the right to vote and the election of Margaret Thatcher as the first female Prime Minister of the United Kingdom. It hasn’t always been that easy, as audiences will see in Joan Bryans’ large ensemble docudrama.

Vital Spark Theatre’s Rebel Women chronicles a verbatim account of the British women's suffrage movement in the early 20th century, whose prime object was to gain women’s right to vote. The play’s narrative and dialogue is extracted directly from conversations, speeches and letters from that period. While characters and events are historically factual, the play has an array of theatrical elements to make it entertaining as well as educational.

Rebel Women opens with Barbara Ellison as one of the play’s numerous narrators in the character of Emmaline Pankhurst “waging civil war” in a campaign beginning with the formation of the Women's Social and Political Union. With overlapping scenes the play continues to recount the suffragettes’ crusade through organised militant tactics, demonstrations and even hunger strikes while imprisoned.

With such a broadly talented ensemble cast it’s difficult to single out a performance that stands above the rest. However, I felt that Rosa Lennox and Andrea Ware in the roles of Maggie Scott and formidable Canadian Mary Richardson respectively, were particularly inspiring. There is local interest in the back story of Helena Gutteridge, who immigrated to Canada, to become a labour activist and the first female elected to Vancouver city council in 1937. Unfortunately, I felt that Sarah Ripplinger’s reading of the character was somewhat underwhelming.

As one might expect from a play entitled Rebel Women, the men get short-shrift, essentially relegated to the roles of double-dealing politicians and policemen. For all that, British-born Dick Pugh manages to get noticed as Prime Minister Henry Campbell-Bannerman as well as multiple minor roles.

Costume designer Jenny Lang must have blown the production budget on the clothing for fifteen actors. She surely deserves kudos for accurate representation of time and place in Edwardian England and attention to detail for the purple, white and green sashes (adopted colours of the WSPU) worn by the suffragettes.

Who should go and see this? Just about anyone, especially men and women who were among the 40% who didn’t bother to vote in the last federal election.