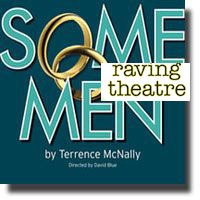 Terrence McNally is no playwright of ideas, but a master at catching the pulse of the gay world at the moment and of yesterday in this play of fluid, sometimes interlocking scenes, stretching from bad days of the repressive 1930-50s to the gay weddings of today, one of which, with deliberate staginess, frames the opening and close.

McNally leaves no cliché left standing, as he uses humour -- but never the lash -- to explore the vagaries, social changes, and cultural models of the past six or seven decades. At times this may seem like Soc 101 or Gay Male History 100 trodding the boards, but it does so with glad grace, and is enlivened by a massively talented cast, without a weak link, and by David Blue's crisp, knowing direction.

The play's kaleidoscopic vision demands that each actor play several roles, and the actors make their chameleon changes so effortlessly that it is hard to single out performances when all nine men perform so well.

Nonetheless, it's hard not to mention as highlights Dana MacInnis's gutsy drag queen, eye-candy handsome Nathan Witte's whiteheat rendition of a moment during the Harlem Renaissance, and Jeremy Leroux's sexy charmer Padraic, the "Oirish Boy" on the make. No less in the tour de force category were the hustler-with-a-brain of Jeff Deglow and the superbutch bitch queen of the chatrooms of the ever capable Nelson Kyle.

The whole gamut of gay life from promiscuity to domesticity to painful solitude, with historical referents thrown in, is a tall order, and McNally never shirks whether it be treating group therapy, or the Baths in the 1970s, or the cataclysm that was Stonewall, Vietnam, and, of course, The AIDS Plague.

Running throughout both the tragedies and the triumph is the sheer, damnable awkwardness of men being together, finding themselves, and making commitments (or not) and the cast and direction convey this with confidence and sensitivity.

Comedy as a genre is always about overcoming societal obstacles and the final assertion of social cohesion, celebrated, typically, in a dance or a marriage (here we get both). But the celebration seems a bit forced here, for the play never digs deep, and we are always simply told of a fighting through to victory. The closet opens and the repressed self jumps out, but this, as in Greek tragedy, seems to happen offstage.

The overly long Stonewall scene, set in that dreariest of dreary places a piano bar full of "show queens" (ugh!), shows how McNally muffs it where he really ought to come out punching. Sure the gaggle of sentimental sallies (just superbly played by the group) are part of an awful and unpoliticized past, and the drag queen -- a self-indulgent, hyper-self-conscious Cassandra announcing the future -- wins the day.

But the Judy Garland Fan Club is never really wrestled to the floor, and this even-handed non-judgmentalness isn't really the point. The play gouges more deftly when it turns on the hyper-politically correct in a scene with two research students -- all theory and no heart -- who dismiss two old dears who, in their quiet unassuming way, really made the Revolution. The "gayby" brigade, flaunting their designer babies, at the ooh-so-posh Hamptons also gets its come-uppance.

New York as world navel cloys more than a bit (and thank goodness Director David Blue nixed any attempt at Nooh Yawk accents), and several of the historical references seem dated and even frowsily provincial. One wonders how many in the mainly youngish audience know who Mayor Lindsay was. But there are also throwaway references to E. M. Forster, Tennessee Williams, Puccini, and Milton. And, as in Shakespeare's calls upon the Classics, you either get these or you don't.

This is a thoroughly enjoyable evening that merits bouquets for all -- the team effort is palpable, as is the talent, and there's not one actor up there who isn't pulling his weight and giving his all. Great job, guys -- you sparkle and dazzle.