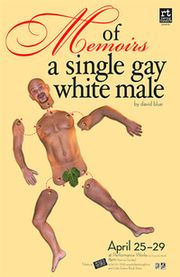 Memoirs of a Single Gay Male

As the English novelist E. M. Forster once wrote of Hinduism "There is laughter in Heaven." And so too in gay life, although for decades stage and screen purveyed (conspiritorially) only the lonely, the melancholy, and near-suicidal as images for popular consumption by the great heterosexual majority, while self-loathing gay men and women quivered in the closet.

David Blue's celebratory new play, by turns wry and witty, is further evidence that the closet itself has simply exploded -- disappeared -- although the "gay ghetto" seems to flourish luxuriantly as Brad, the central hero, makes his way through gay cliche after gay cliche on the way to finding true happiness and his true self. Dressed as a clone, Brad is desperate to be just like everyone else.

The play is essentially a monologue -- and Vancouver has seen quite few of these of late (Morris Panych's Vigil, The Syringa Tree and the upcoming Andersen Project). Blue seems to be on the crest of a wave. There are interactions with other characters, but the friends, lays, and contacts come off mainly as one-dimensional props, bits of Brad's story with no life of their own. Even Brad's dream man, Bobby, who comes and goes in his life, is a stick-figure: something to hang need and love upon.

As Brad the Gay Everyman, making his way through the tangles of West End Vancouver and desperately trying to fit in, to discover himself, to discover True Love, to find Meaning, Jamie Foster offers a winning performance, carrying the evening. It is a tad long, and the play could do with some judicious snipping. There were several flubbed lines and a couple of uneasy recoveries, but the sheer number of lines Foster had to deliver was daunting.

Staging, lighting, and props are simple but effective, as Brad moves through the literal stages of his life. The drama, after all, takes place inside. The pity is that Brad is a rather shallow type, never questioning the cliches that he so eagerly wants as his own. He's not a bad guy, just a sort of clueless one, keen to buy the shopworn goods that everyone else wants or has. David Blue portrays his quandaries symphathetically, and there's some very good writing and fine pacing.

Satire shows up our foibles, whereas comedy makes us laugh. Funny moments abound here, but greater social bite would have given just a bit more depth to what at times is almost a pageant as Brad moves through the stages of coming out to uneasy early middle age.

Brads there are aplenty, and this is more a case of instant recognition than analysis. You won't leave the theatre knowing or feeling anything more than when you went in, but it's a pleasant evening, and the cast are committed and at times really deft.