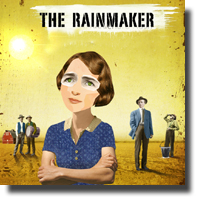 Time is, among other things, a cultural palimpsest. That being said, one might describe the drought-filled images and themes of the 1954 Richard Nash play The Rainmaker—which on the surface appears to grapple with the issue of who will make it rain—as constituting a thesis in an American literary syllogism whose ironic antithesis may well be the quizzical 1970 John Fogerty / CCR song "Who’ll Stop the Rain?" This song suffuses a good deal of its intrigue and suspense within these magical lyrics: “clouds of mystery pourin’, confusion on the ground, good men through the ages trying to find the sun, and I wonder, still I wonder who’ll stop the rain?” Good men’s “frail deeds (don’t always) dance in a green bay,” no matter what Dylan Thomas might say about not going gentle into the clouds of mystery pouring into that good night. And the only rage in the 1954 Nash play is not against the dying of the light, but against the lack of rain (which translates into a lack of good marriage prospects for Lizzie).

But back to the thesis and antithesis: Whereas The Rainmaker portrays rain as a symbol of hope and dreams that bring about deliverance from more mundane matters, the Fogerty song portrays rain as a symbol of sin that must be expiated by good men seeking light and purity; the former came into its own during the dustbowl agrarian crisis known as the Dirty Thirties, while the latter gained popularity against a backdrop of protest surrounding the Vietnam War. So under what circumstances does the concept of American style hope (rather than love) cover over a multitude of sins?

Every syllogism needs a grand finale, and now that the Twenty-First Century is just getting used to being in its teens, along comes the Pacific Theatre production of The Rainmaker to give us a fine synthesis.

But first a bit about what happens in the play: The Curry family are desperate for two things—namely rain and a man to marry young Lizzie. The livestock are languishing in the fields, and self-conscious Lizzie is convinced she’s too plain to attract a man. Conveniently, the answer to both of these problems seems to show up when a man named Starbuck appears at their drought-starved door. Starbuck calls himself the Rainmaker and despite—or maybe because of—all his eccentricities, he knows just how best to encourage Lizzie, who seems to have lost her hope.

If Pippa Johnstone’s Lizzie is refreshingly convincing as an example of what happens to femininity when you are the only female in farm family of men, her portrayal of innocence, frustrated desire and nearly abandoned hope finds an apt foil in Robert Salvador’s ‘fire-in-the-belly’ Starbuck. She sees beyond his flim-flam ways, and Johnstone’s solidly grounded performance is an intriguing counter-poise to Salvador’s evocative portrayal of a pie-in-the-sky ‘dream-it-into-being’ sense of wide-eyed wonder.

If the Rainmaker turns out to be considerably less than what he represents himself to be, File the deputy—played with solid taciturn machismo by John Voth—shows himself to be more than what he previously seemed to be when he has mercy for the criminal, and lets Starbuck go free even though he turns out to be a wanted man. Starbuck asks Lizzie to go away with him, but File begs her to stay (something he’d previously admitted to her that his pride had prevented him from asking his ex-wife). Starbuck is an emblem of unrealistic dreams, and by allowing him to convince her to believe in herself a little more, Lizzie shakes herself free from the morass of despair, thus paving the way for File to give him his freedom, and thereby covering over a multitude of sins.

Now the aforementioned synthesis appears in the way the Pacific Theatre production represents the love triangle of Starbuck, Lizzie, and File. Starbuck helps Lizzie to really cut through her insecurities and see herself for who she really is, whereas File’s plea reminds her of her farm girl roots and what it means to really be herself. The synthesis relates to the fact that Lizzie realizes that dreams are fine for dreamers, but the only way that hope can survive is if it is grounded in a reality.

Andrew Wheeler, whose inimitable performances always end up with him making the role his very own, sums up Lizzie’s situation wonderfully as her father when H.C. comments on his daughter’s prospects: “At least you was asked.”

In the final analysis, it is all the same: whether you want it to rain or you can’t wait for someone to make it stop raining, you must be prepared to immerse yourself in your hopes and dreams, transcend your sins, and finally become who you really are meant to be. This is the synthesis that director Ron Reed has managed to weave artfully into the Pacific Theatre’s excellent 2014 production of The Rainmaker.