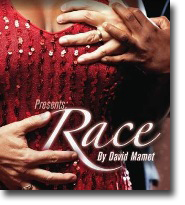 I'm hard pressed to find anything to disparage after seeing David Mamet’s controversial play, Race at Vancouver's Studio 16. Mamet is arguably one of today’s best and edgiest writers due not in small part to his talent for writing fast-paced, overlapping, and cynical dialogue for his characters. Moreover, the collaboration between Mitch and Murray Productions and Rooted Theatre Productions does the critically acclaimed writer much justice.

Race tells the story of a wealthy white man (played here by Craig Erickson) who is charged with sexually assaulting a younger black woman, and who solicits the legal aid of a law firm where one black lawyer and one white lawyer who discuss whether or not they should take the case. The play’s central action surrounds the discussion between the two lawyers (along with the young black female employee), who weigh the evidence of the case along with their own feelings about race, gender, and sexuality.

The cast conveys the biting prejudice in this story extremely well. Aaron Craven (who both produces and plays the Caucasian lawyer, Jack) delivers a very strong performance as the audience can see him working through potential arguments, thinking through the subject matter. Craven as Jack challenges the play’s audience to answer the question: do we want the truth or a lie? Mamet’s complex script ensures the audience is exposed to both.

Craig Erickson plays Charles (the defendant), an anxious executive who betrays neither innocence nor guilt. He embodies well what African-American lawyer Henry describes as the trifecta of “hatred, fear, and envy.” Henry is played by Kwesi Ameyaw who represents a solid counterpoint to Craven’s Jack (both physically and character-wise), and the dialogue between the two lawyers is well-paced and well-timed (as Mamet’s plays often pose a challenge in this regard).

Haitian Marsha Regis joins in as the strong-willed Susan (Jack’s intellectual side-kick and office administrator/paralegal, though her role is not officially stated), and is oddly reminiscent of Kerry Washington who played this role in the original premiere on Broadway. Regis, as Susan, serves as an interesting character who is not as naïve as she first seems, and quickly becomes intertwined with the discussion of gender and prejudice between the two male lawyers.

The claustrophobic set design works wonderfully to integrate the audience into the unfolding action. With 2 open walls (rather than the traditional 3-walled theatre set-up), audience members are allowed to feel present and immersed in the progressing drama, especially as the theatre remains fairly well-lit throughout, as opposed to conventionally darkening the seated areas to spotlight the stage space.

Ultimately, this play achieves Mamet’s intent to provoke and disturb audiences, and is rife with shocking yet witty content. As Jack states, “race is the most incendiary topic in our history,” and this performance deals well with the tricky subject matter of race and exploitation. The ensemble cast have done a good thing here, and made this premiere night a triumph. I sincerely hope this production attracts many more theatre-goers during its run this November.