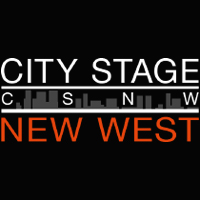 The beautiful stain glass windows of the Holy Trinity Church made a wonderful backdrop for the concert reading of Queen Lear. Queen Lear is a Canadian comedy about an aging actress, Jane (Marilyn Norry) who is about to play the part of King Lear in an all female production. She needs to rehearse and hires Heather, the teenage daughter of Jane’s dead husband’s architect-business-partner. Jane is insecure about her age and about remembering her lines

Many of the funny puns about age caused snickering among the many baby boomers in the crowd – surely the sign of a well written script. As the actors read their lines the timing of the cello notes were humorous as an intended annoyance. As the reading progressed, the differences and commonalities of these two women began to emerge. Heather had recently lost her mother and Jane is a widow who lives alone. Their age difference provides great material for many of the humorous lines. Jane tries to teach Heather the importance of using words correctly after Heather uses the word “Whatever” as modern slang.

I would have enjoyed the reading more if the loudspeakers were further back in the church. We were in the ninth pew and it was difficult to hear all that was being said. Luckily some of the best lines that got the biggest laughs were audible to us. The concert reading was a tad on the slow side at the beginning and definitely more projection was needed to be heard by everyone in the audience.

Concert readings are not for many husbands since I spotted a few nodding off. I am presuming the nodding was due to the inability to hear the performance. A comedy concert reading when well executed in both projection and animation should not have people sleeping in the audience. I have to admit that the persons on both sides of me were trying very hard to stay awake about half way through the performance.