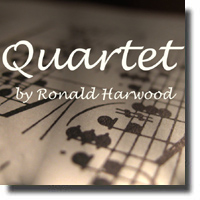 This is my first time at the playhouse and I’m delighted to see original art works in the foyer and the theatre is comfortable with a stage that is well designed.

Ronald Harwood’s comedy is set in Kent, England where there is a celebration each year of Verdi’s birthday on October 1st at the retirement home, Beechan House. Three residents are planning a concert to raise money for the retirement home. Things get more complex when former opera singer Grand Dame Jean moves in. It just so happens that she is the ex-wife of Reggie one of the present tenants.

Two residents, Cissy and Wilf start to discuss plans for their concert. Reggie, the third resident sits in his chair reading a book and is indifferent to the planning. Much bickering goes on as to what they will be organizing. Wilf is a funny character who is always making sexual innuendos. He takes advantage of Cissy who has her earphones on and makes sexual comments towards her and of course she can’t hear him. When Jean, Reggie’ ex wife shows up Reggie wants nothing to do with the play.

The first half of the performance was somewhat slow and seemingly repetitious. If an actor cannot do an English accent well then it's best not to do one at all.

The second half of the performance was really well done. The period costumes were bright with Reggie and Wilf looking professional and yet funny, with the pantaloons adding such charm to the two men. When all four actors form their quartet in full costume it was picture perfect.

If the first half could be as well done as the second half of the play it would be a winner.