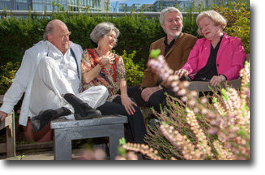 Last night Quartet opened to an enthusiastic audience at PAL Studio Theatre. From the opening scene of raunchy dialogue to the final curtain the audience was entertained with laughter, somber reflection and an insight into life’s travails.

Yvonne Adalian (Jean), Sean Allan (Reggie), Wendy Morrow Donaldson (Cissy) and David Petersen (Wilf) took us on a journey that exposed life’s regrets and the difficulties of adjusting to a new reality. Each character was so well developed by these seasoned actors that it felt as if we were watching real life unfolding.

It is interesting that the plot of the play also reflects PAL, thus adding an extra layer of meaning to the performance. The Performing Arts Lodge was established in 2006 to “provide senior, disabled and in-need performing artists a stable place to call home.” For many in the audience, Quartet’s opening night was their first visit to PAL. It is a gem, tucked into Coal Harbour that should be on everyone’s list who want to experience really good theatre.

Directed by Matthew Bissett, who has extensive experience in the world of theatre and opera, the play flowed with a timed rhythm that gave the actors the momentum they needed to play off each other. The timing and delivery of lines and the movement on stage enhanced the pace and energy of the production.

The set (Glen MacDonald) was very creative in its design. A small stage, it was divided effectively into areas for the actors to work in by the placement of furniture and two large carpets. The lighting design (Nathan Hoffman) enhanced the set and was especially effective when light was shone only on two actors while the other two were in shadow allowing for the audience to feel the separation of the players.

Quartet is a story about a home for retired opera singers and musicians who decide to put on a performance of Rigoletto so as to save the home from closure. It is a warm and funny play that gives insight into the realities of ageing. The story takes inspiration from the home founded by Giuseppe Verdi in 1896, Casa di Riposo per Musicisti.

This RAProductions mounting of Quartet ends with Cissy, Reggie, Jean and Wilf performing Rigoletto to the house. It is a clever and funny last scene that is masterfully executed by Donaldson, Allan, Adalian and Petersen. They took their bow in character to a very appreciative audience. Their rich performance should have been allowed a second ovation for the actors themselves. For "Art is nothing if it doesn’t make you feel" and these actors certainly made the audience feel their art.