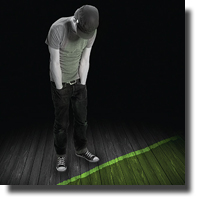 The She She Pop production of Testament is pretty serious theatre. So serious in fact, that almost the entire play is performed in the German language. Fortunately for the Teutonically challenged, there were English surtitles projected on the rear stage blinds.

Testament is one of a couple of foreign language productions based on William Shakespeare’s King Lear offered in this year’s PuSh festival (the other is the Mandarin version presented by Contemporary Legend Theatre). Bard devotees are all too aware of the cautionary tale of a king who retired too soon and over-estimated his daughters’ affection (at least two of them) that didn’t end well.

But this independent mounting, while loosely structured in Lear’s sequence of acts and sporadically incorporating Shakespeare's translated text, is less a theatrical adaptation than a dramatic model to elucidate emotional chaos resulting from generational conflicts that no doubt reflects the performers’ personal experiences.

The play starts in typical ‘Indie’ theatre fashion with Lisa Lucassen, Mieke Matzke, Ilia Papatheodorou and Sebastian Bark coming to centre stage to reveal what is needed to gain the respect of their own father. None of these actors assume the roles of the Lear children, as all four appear as themselves.

Enter Manfred Matzke, Theo Papatheodorou and Joachim Bark. We immediately discern them as not being actors but the performers’ real life fathers, all of whom are in their seventies.

It is ‘the fathers’ that bring the lighter moments to the show. The senior Matzke, who purports to be a retired scientist, uses his knowledge of physics to demonstrate King Lear’s folly and explains alternate methods of how modern fathers might parcel out their wealth gradually in their old age. In the final act, Ilia and Theo Papatheodorou give a deliberately reminiscent rendition of Frank and Nancy Sinatra’s “Something Stupid.”

At two hours long with no intermission, it does tend to meander. There are lengthy dissertations on the parallelism of Lear’s one hundred knights and a contemporary father’s extensive library. And I’m sure the audience could have done without the father-daughter/son pairings of listening to songs played in their entirety. The songs may have meant a lot to those on stage, but very little to the audience.

The play concludes with ‘the fathers’ handing their crowns over to their offspring; an act that symbolizes generation change-over. Testament may at times come across as platitudinous, though in its exploration of complex emotional situations, it could also be seen as profound.