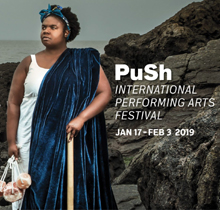 Entering the theatre space at the Roundhouse Community Arts Centre, a large black woman is standing at a narrow workbench under a triangular fluorescent light in a sleeveless white dress. This is Selina Thompson who is about to dominate the stage in her one-woman show. I chose a seat in the second row where I found a pair of safety goggles. I later learned that part of the show involves the performer bashing lumps of salt rock with a sledgehammer.

Throughout the show, Thompson speaks directly to the audience, first introducing herself in a soft West Midlands accent (she was born in Birmingham, England) then going into some details of her heritage. The triangular fluorescent light is intended to represent the Transatlantic Slave Triangle linking Africa, Europe and the Caribbean. The essential component of Thompson’s performance is in her recounting a sea voyage to Ghana by cargo ship, on which she encountered abject racism, especially by the captain whom she oddly refers to as “the master.” The same captain who had no qualms about telling her “that racism was in the past.”

Salt is not just the title and a powerful metaphor but also a significant presence. In the act of smashing a rock the size of a pillow into a mix of stones and powder, she releases pent up anger at everything and anyone that has caused her (and others) the indignity of racially based prejudice.

In the earlier part of the show, the oft-used phrase “Europe pushes against me, I push back” becomes her survival mantra; which I took to stand for her internal resistance. While this piece of theatre is about Thompson’s personal journey, it is also about the journeys of thousands of African men, women and children who were subjected to forced migration from their homeland.

It’s certainly somber subject matter and one that many would prefer not to deal with, but Thompson does allow some humour. In Ghana during Independence Day celebrations, she was asked by a local woman if Britain also celebrated Independence – the anecdote brought out spontaneous laughter from the audience.

Leaving the theatre, Thompson invited everyone in the audience to take a piece of salt rock from a basket to remember and perhaps even to contemplate further.