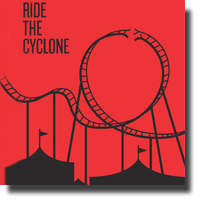 Included in the PuSh International Performing Arts Festival this year is the Atomic Vaudeville production of Ride the Cyclone. Each year the Arts Club partners PuSh with one presentation, and for the 2013 festival, the honour falls on Jacob Richmond’s surrealist musical, Ride the Cyclone.

The show borrows a little from the Fox channel television show Glee and a little more from the cult film Rocky Horror Picture Show. However, its structure is simpler than that of either of them. Six high school seniors who form the choir at St. Cassian Catholic School in Uranium, Saskatchewan decide to take what turns out to be a last fateful ride on a roller coaster named the ‘the cyclone.’ Alas, the roller coaster is in as much disrepair as the town itself; so when the car carrying the students leaves the track, all six occupants are killed.

The narrative is framed through the voice of The Amazing Karnak, a fairground fortune-telling machine who had foreseen the grizzly event, but due to its programming set to “family fun”, it neglected to alert any of the luckless classmates.

The show starts and finishes with the ensemble number “Uranium”, about the economically declining town where they live. Karnak then engages the kids, now stuck between life and afterlife, in a contest that would decide on one group member returning to pre-death existence.

First up is Ocean O’Connell Rosenberg (Rielle Braid), a half-Jewish, half-Catholic, self-proclaimed Marxist-Reaganite with the “highest grade point average.” Next is Noel Gruber (Kholby Wardell), the only known gay teen in Uranium, who, never having had the chance to live out his sexuality, opts to live out his fantasy with “That Sort of Girl” Parisienne prostitute with a “heart of black charcoal.” Inspired by French avant-garde cinema, Wardell displays audacious movement, but the whole thing would have worked even better were he able to lower his voice half an octave.

Everyone gets a chance to shine within their own choice of musical genre. Mischa Bachinsky (Jameson Matthew Parker), a Ukrainian adoptee, goes for broke with Gangsta rap. Ricky Potts (Elliot Loran), a victim to spina bifida in life, jettisons his crutches in this nether zone and really comes to life with his Glam-rock number.

All the performers acquit themselves well, but it’s left to Sarah Jane Pelzer in a totally capriciously macabre performance of Jane Doe to really wow the audience. Pelzer wanders around the stage with black contacts clutching a headless doll that symbolizes her own decapitation. She freaks out the others before gaining acceptance with a poignant rendition of “Who I am” that might have been written by the incomparable Kurt Weill.

Cyclone has a lot more style than substance; eccentricity is preferred to creative story-telling. Jacob Richmond’s strength is in his ability to entertain the audience. At least to this end, Ride the Cyclone delivers in abundance.