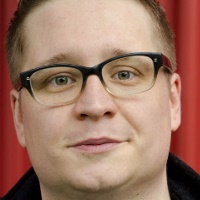 Winston Churchill, or maybe some other politician, once said “If you're not a socialist at 20 you have no heart, if you are still one at 40 you have no brain.” Charlie Demers, at 35, still has another five years to show he has a brain, but he is hardly likely to alter his political bent.

The star of CBC Radio’s The Debators, collaborated with his co-creator and director Marcus Youssef to mine his leftist leanings into a satirical monologue, styled somewhere between a Ted Talk and one of his regular club stand-up routines.

The show started fashionably fifteen minutes late, with Demers warming the audience with lighthearted pre-show announcements that included “recognizing” ultra bourgeois sponsors (that had nothing to do with sponsoring the show). Demers isn’t so much a “Red,” flag-waving socialist (well, he does in fact wave a red flag early in the show), and although he is passionate about social justice, he certainly isn’t a nihilist.

He is even self-deprecating about his political viewpoint. At one point, he presents a montage of heroic socialist leaders like Mandela and (Mohandas) Gandhi, but also includes socialist “villains” like Stalin, flouting with tongue-in-cheek humour that he often tells friends he named his daughter Josephine after the former Soviet leader.

Demers was born on Canada Day in 1980, roughly halfway between the elections of Margaret Thatcher in Briton in May, 1979 and of Ronald Reagan as president of the United States in November, 1980 – arguably the worst time in modern history to be a socialist. The comedian was evidently not alone in the house with leftist views. When showing a video of Arnold Schwarzenegger endorsing American economist Milton Friedman’ book “Free to Choose” there was very audible derisory laughter from the audience.

Leftovers starts much better than it ends. There is a point in the show when Demers appears to allow acerbic pasquinade and parody to give way to sentiment.