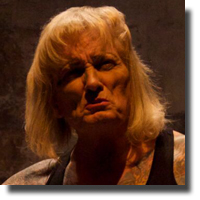 Miss Understood is Antonette Rea’s poetry handle. It’s also her magnum opus of the incredibly detailed story of her life, through her own poetry. Had she looked for a more descriptive title, she might have borrowed from playwright Eugene O'Neill and used Long Day's Journey into Night. It’s not just a story of gender transition, nor even a simple story of survival on the mean streets of Vancouver Downtown East Side.

The transmogrification from a middle-class family man to transgender woman picking up johns on the streets took Rea down a very dark tunnel where she was abandoned by her family and abused by everyone including the police. Antonette Rea has had a tough life and shows the emotional and physical scars to prove it.

The show starts with Rea standing on a step-up stage between an attractive man and an exotic woman as if to underscore a transformational fantasy. In the background, we hear her recorded voice describing in toned-down slam poetry the mayhem of a violent encounter.

All three performers are dressed in black, but only the Rea reveals tattoos that cover her arms and upper torso. The tattoos give her an outward toughness, but her voice exposes a vulnerability that draws empathy.

Rea manages to bring audible poignancy to her words, but there is very little modulation. She is neither a trained artist nor a natural performer, so her movements often seem stiff. It therefore falls to Starlise Warschchuk and Austin Eckert to enunciate the dialogue’s tension and express Noam Gagnon’s theatrical movement.

It requires special courage to bare your soul in a public arena. It’s been that kind of fearlessness and fortitude that has helped Antonette Rea through that dark tunnel and into the light at the end.

Rea still lives in Vancouver and enjoys a healthy relationship with her daughter. She also facilitates a poetry klatch at Carnegie Hall, on the corner of Hastings and Main.